Despite dire implications elsewhere, Nova Scotia grape growers have branched out beyond hardy North American varieties and begun planting chardonnay and riesling—all thanks to global warming 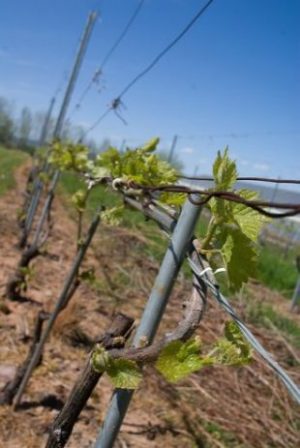 HALIFAX—The skies have been brilliant blue in Nova Scotia wine country this October, the vines heavy with grapes, and winemakers like Sean Sears are seeing crops they could only vaguely hope for in the past.

Amid the havoc wrought elsewhere by global warming, Annapolis Valley vineyards have flourished as temperatures have moderated.

“If this trend continues we’ll be sitting in one of the great wine regions,” Sears says in an interview.

Sears says his Petite Riviere vineyard has already clipped fruit with sucrose counts higher than anything his plants have produced in his memory, while the skin, seeds and flesh are ripened to ideal levels for the wines he will create.

Meanwhile, the solar warmth stored in his plants avoided the need to prune the vines, increasing his yield by 30 per cent over last year.

“Every winery is planting more plants. … I have colleagues that are having about 10 hectares a year coming on,” he says.

Global warming is proving to be both blessing and curse for the wine industry, with some traditional regions like California coping with wildfires and premature harvests, and even France seeing centuries-old patterns of grape growing disrupted by freak frosts.

But in Nova Scotia, vineyards in areas once thought too cold for anything but hardy hybrid grapes designed for North America have started planting European chardonnay and riesling varieties, says Sears.

Across the province, cultivation for the 21 wineries has grown from 160 to 323 hectares in a little over five years, according to the Grape Growers Association of Nova Scotia.

One key shift is that the fiercest winter days once capable of killing the vines are becoming a rarity.

“Bottom line, as climate warming continues on the current trend, experiencing -25 (Celsius) will not occur in future (besides as an episodic event),” he writes in an email.

The trend will continue, though farmers should also brace for wider swings of temperatures, says a senior climate scientist with Environment Canada.

Xuebin Zhang said in an interview that federal models suggest an average rise of one third of a degree over the next decade due to the greenhouse gases already present in the atmosphere.

However, factors such as the North Atlantic Oscillation in atmospheric pressures may also mean years where the temperature fluctuations are much wider, creating “prolonged time periods that are colder than usual or warmer than usual,” he said in an interview.

“From year to year there’s a huge range of variation of five to six degrees,” he said, adding precise predictions are almost impossible.

A drought two summers ago caused a fright, with Sears saying many of his plants were saved only by their ability to draw moisture from the morning dews.

Mike Mainguy, the winemaker at Luckett Vineyards in Wallbrook, N.S., said it’s important to recall global warming is “a scary thing in the big scheme of things.”

“But … it’s been pretty ideal for what we’re doing here. It’s made grape growing more efficient and it’s certainly made production more manageable and efficient as well.”

At the Benjamin Bridge winery in Gaspereau Valley, Jean-Benoit Deslauriers says the climate evolving in the Annapolis Valley—which already benefited from warmer microclimates along the Bay of Fundy—is allowing winemakers like himself the luxury of flexibility.

He said it allows for choices on when to harvest for the proper balance of fruit ripeness and sugar level, depending on the wine they’re seeking to create.

“There’s very much a margin of error. There’s wiggle room we have to gain in maturity, and sugar content and richness.”

Francisco Diez came to Nova Scotia in December and, as the viticulture specialist at the provincial development agency Perennia, has started studying possible new grapes for cultivation in the province.

“With the weather warmer than before, and winter not so cold, it’s allowed varieties that couldn’t be grown before, including riesling, chardonnay and pinot noir. It is a surprise,” said the scientist, who grew up in Chile.

After a 20-hour day preparing wines, Mainguy said he’s shy about making grand predictions about this year’s vintage, fearing he’s tempting fate by speaking of how Mother Nature is co-operating.

“I’m kind of pessimistic by nature,” he said.

Still, with hurricane season almost over and pleasantly warm ocean breezes flowing over the fields, the winemaker concedes the growing season was just about ideal.

“We’re all quietly smiling,” he said.