A contentious Obama administration rule will allow wind power firms to legally kill thousands of eagles, as long as they take steps to minimize losses 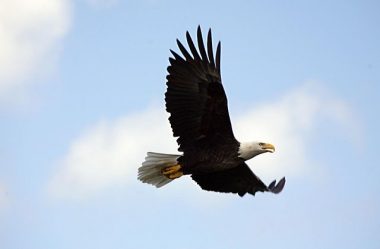 WASHINGTON—The Obama administration has finalized a rule that lets wind-energy companies operate high-speed turbines for up to 30 years—even if means killing or injuring thousands of federally protected bald and golden eagles.

Under the new rule, wind companies and other power providers will not face a penalty if they kill or injure up to 4,200 bald eagles, nearly four times the current limit. Deaths of the more rare golden eagles would be allowed without penalty so long as companies minimize losses by taking steps such as retrofitting power poles to reduce the risk of electrocution.

“No animal says America like the bald eagle,” Ashe said in a statement, calling recovery of the bald eagle “one of our greatest national conservation achievements.” The new rule attempts to build on that success, Ashe said, adding that the Fish and Wildlife Service is trying to balance energy development with eagle conservation.

Wind power has increased significantly since Obama took office, and wind turbines as tall as 30-story buildings are rising across the country. The wind towers have spinning rotors as wide as a passenger jet’s wingspan, and blades reach speeds of up to 170 mph at the tips, creating tornado-like vortexes.

The surge in wind power has generally been well-received in the environmental community, but bird deaths—and eagle deaths in particular—have been a source of contention.

The birds are not endangered species but are protected under the Bald and Golden Eagle Protection Act and the Migratory Bird Treaty Act. The laws prohibit killing, selling or otherwise harming eagles, their nests or eggs without a permit.

It’s unclear what toll wind energy companies are having on eagle populations, although Ashe said as many 500 golden eagles a year are killed by collisions with wind towers, power lines, buildings, cars and trucks. Thousands more are killed by gunshots and poisonings.

Reporting of eagle mortality is voluntary, and the Interior Department refuses to release the information.

The Fish and Wildlife Service estimates there are about 143,000 bald eagles in the United States, and 40,000 golden eagles.

The new rule is set to take effect in mid-January, days before Obama leaves office. President-elect Donald Trump could change the rule or scrap it, but the process would likely takes months or years.

Ashe declined to be interviewed, but he said in a blog entry Wednesday the total number of eagles killed per year is likely to be in the hundreds, not thousands.

“We can’t eliminate human-caused eagle loss any more than we can eliminate risk from any other facet of modern life,” Ashe wrote, but the new rule should reduce deaths and allow officials to better manage risks to bald and golden eagles.

Michael Hutchins of the American Bird Conservancy said Wednesday that his group has “some serious concerns” that the new rule will not do not enough to sustain populations of threatened eagles.

Still, Hutchins said, he is encouraged that the rule requires independent contractors to provide data on bird kills to the government, rather than allowing energy companies to submit the information. He also praised a requirement for greater public reporting of data on the numbers of birds killed by wind turbines.

Permits issued by the government would be reviewed every five years, and companies would have to submit reports of how many eagles they kill.

Kiernan said the industry is working to further reduce what called its “minimal impact” on eagles in hopes of “maintaining healthy eagle populations for generations to come.”