New B.C. Premier vows to use ‘every tool in the toolbox’ to stop Trans Mountain expansion

The province has hired a former judge to provide legal advice as it seeks intervener status in court challenges against Ottawa's approval of Kinder Morgan's $7.4-billion pipeline expansion project 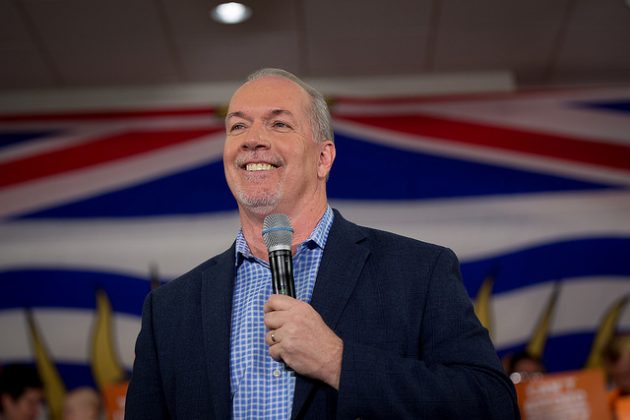 VANCOUVER—British Columbia says it will join the legal fight against the Trans Mountain pipeline expansion, while warning the company it can’t begin work on public land until it gets final approval from the province.

The NDP government has hired former judge Thomas Berger to provide legal advice as it seeks intervener status in court challenges against Ottawa’s approval of the $7.4-billion project.

Premier John Horgan promised in the provincial election this spring to use “every tool in the toolbox” to stop the expansion by Trans Mountain, a subsidiary of Kinder Morgan Canada.

Several First Nations and municipalities have filed legal challenges against the project, which would triple the capacity of the Alberta-to-B.C. pipeline and increase the number of tankers in Vancouver-area waters.

Environment Minister George Heyman said the expansion is not in the province’s “best interests.”

“A seven-fold increase in tanker traffic in B.C.’s coastal waters is simply too great a risk to our environment, our economy and to thousands of existing jobs,” he said.

Trans Mountain has said construction is set to begin in September, but Heyman said only three of eight environmental management plans required by the province have been accepted. It’s unlikely those remaining will get approval before work was to start, he said.

The other five management plans have not been accepted because the company didn’t adequately consult First Nations, Heyman said.

“Until that has been completed, Kinder Morgan, with the exception of some private land and some clearing of right-of-way, cannot put shovels in the ground.”

Heyman said a storage facility and marine terminal in Burnaby are on private property, but the majority of the pipeline either passes through First Nations territory or public land.

Kinder Morgan Canada president Ian Anderson said the company takes the comments of the B.C. government seriously and will meet with it to work through its concerns.

“We have undertaken thorough, extensive and meaningful consultations with Aboriginal Peoples, communities and individuals and remain dedicated to those efforts and relationships as we move forward with construction activities in September,” he said in a statement.

Fifty-one First Nations have signed mutual benefit agreements with Trans Mountain. Heyman said some do not necessarily favour the pipeline but want to ensure their people benefit if it proceeds.

The province is also committed to further consultations with First Nations on the project, including the impact it has on Aboriginal rights and title, Heyman said.

Attorney General David Eby said the legal challenges against Ottawa’s approval are expected to be heard this fall.

The Squamish Nation has also filed a lawsuit against B.C. over its environmental certificate, putting the new government in the awkward position of having to defend the approval of a project it opposes.

Eby said the province is working closely with Berger, a renowned lawyer and leader of the B.C. NDP in the 1960s, whom the attorney general praised as a “living example of modern First Nations law in Canada.” Berger and his team will be responsible for filing a response to the Squamish Nation’s lawsuit.

A spokesman for Natural Resources Minister Jim Carr said the federal government’s approval of the project was based on facts, evidence and the national interest.

“We look forward to working with every province and territory to ensure a strong future for Canadians but the facts and evidence do not change,” said Alexandre Deslongchamps in a statement.

The province’s announcement won support from environmental groups and the Green party, which has signed an agreement to back the minority NDP government in the legislature.

Green Leader Andrew Weaver accused Prime Minister Justin Trudeau of playing a “political game” and “bullying” B.C. He said the outlook for the project is dark given the opposition from the province, environmental groups and many Vancouver-area voters.

“Trans Mountain will never be built,” Weaver said. “I’m convinced of that.”

The Canadian Association of Oilwell Drilling Contractors condemned the province’s position and called on Ottawa to prevent B.C. from “holding the jobs and livelihoods of thousands of Canadians and British Columbians hostage.”

B.C. Liberal Leader Rich Coleman said the NDP is driving home the message that the province is not open for business.