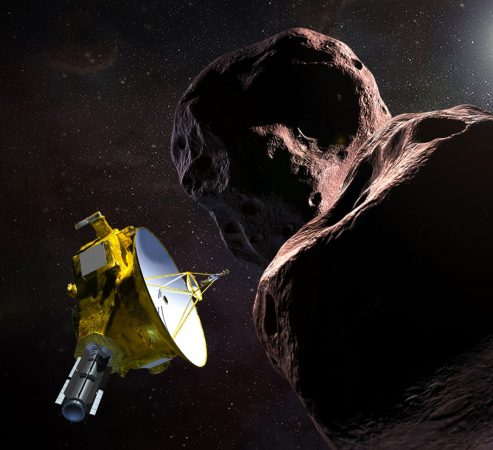 LAUREL, Md. – NASA’s New Horizons spacecraft has survived the most distant exploration of another world, a tiny, icy object 4 billion miles away that looks to be shaped like a peanut or bowling pin.

A huge spill-over crowd in a nearby auditorium joined in the loud celebration, cheering each green, or good, status update. Scientists and other team members embraced, while hundreds of others gave a standing ovation.

“I don’t know about all of you, but I’m really liking this 2019 thing so far,” lead scientist Alan Stern of Southwest Research Institute said to applause. “I’m here to tell you that last night, overnight, the United States spacecraft New Horizons conducted the farthest exploration in the history of humankind, and did so spectacularly.”

New Horizons zoomed past the small celestial object known as Ultima Thule 3 1/2 years after its spectacular brush with Pluto. Scientists said it will take nearly two years for New Horizons to beam back all its observations of Ultima Thule, a full billion miles (1.6 billion kilometres) beyond Pluto. At that distance, it takes six hours for the radio signals to reach Earth.

Scientists did not want to interrupt observations as New Horizons swept past Ultima Thule – described as a bullet intersecting with another bullet – so they delayed radio transmissions. The spacecraft is believed to have come within 2,200 miles (3,500 kilometres) of Ultima Thule.

Weary from dual countdowns late Monday and early Tuesday, the New Horizons team members were visibly anxious as they reassembled in late morning. “Happy New Year again,” they bid one another. But the hundreds of spectators went wild nonetheless when the good news came in.

New Horizons’ 2015 encounter with Pluto was the most distant exploration until Tuesday. The Ultima Thule rendezvous was more complicated, given its 4 billion-mile (6.4 billion-kilometre) distance from Earth, the much closer gap between the spacecraft and its target, and all the unknowns surrounding Ultima Thule.

Based on rudimentary pictures snapped just hundreds of thousands of miles (kilometres) before the 12:33 a.m. close approach, Ultima Thule is decidedly elongated – about 22 miles by 9 miles (35 kilometres by 15 kilometres). Scientists say there are two possibilities: Ultima Thule is either one object with two connected lobes, sort of like a spinning bowling pin or peanut still in the shell, or two objects orbiting surprisingly close to one another. A single body is more likely, they noted. An answer should be forthcoming Wednesday, once new and better pictures arrive. The best colour close-ups, though, won’t be available until later in January and February.

The icy rock has been in a deep-freeze preservation state since the formation of our solar system 4.5 billion years ago. Scientists hope to learn about those origins through New Horizons’ observations deep inside the so-called Kuiper Belt, or frozen Twilight Zone, on the fringes of the solar system.

New Horizons will continue to zoom farther away. The hope is that the mission, now totalling $800 million, will be extended yet again and another target will be forthcoming sometime in the 2020s.

Ultima Thule is the first destination to be reached that was not even known until after the spacecraft’s launch. New Horizons rocketed from Cape Canaveral, Florida, in 2006.