"Whatever it was, it smelled like burnt plastic," said a rescuer of the caustic cloud that enveloped a U.K beach, leaving more than 130 people with sore throats and breathing problems 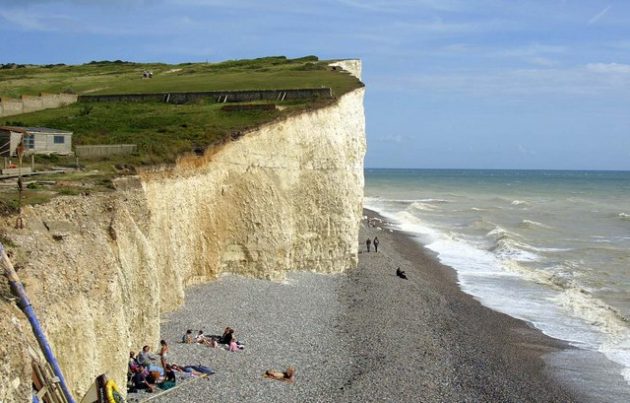 The Cliffs at Birling Gap, a popular U.K. tourist destination, was hit with a toxic cloud that injured beachgoers and forced a coordinated rescue. PHOTO: Steve Daniels

LONDON—A mysterious chemical haze that left scores of people on the English coast with streaming eyes, sore throats and breathing problems has dissipated, but its cause remains a mystery, police and emergency services said Monday.

The gas cloud appeared Sunday, sending people fleeing from the beach and cliffs at Birling Gap, a coastal beauty spot about 100 kilometres south of London.

Life boats were dispatched to help clear people from beaches, and Eastbourne District General Hospital said it had treated more than 130 people. Sussex Police said the injuries were mostly minor.

“Whatever it was, it smelled like burnt plastic,” said Bob Jefferey of the Royal National Lifeboat Institution’s Eastbourne division. “It hung about and didn’t move yesterday because there was no wind. The cloud seems to have dispersed today, though.”

Pollution has been known to drift to Britain from industrial units in France, but police said wind direction made that unlikely in this case.

“Neither the gas nor its source have been established, but agencies are continuing to investigate and have not ruled out either on-shore or off-shore locations,” Sussex Police said in a statement.

Meteorological Office weather forecaster Jay Merrell said a vessel in the English Channel may have been responsible, but stressed nothing conclusive had been proven yet.