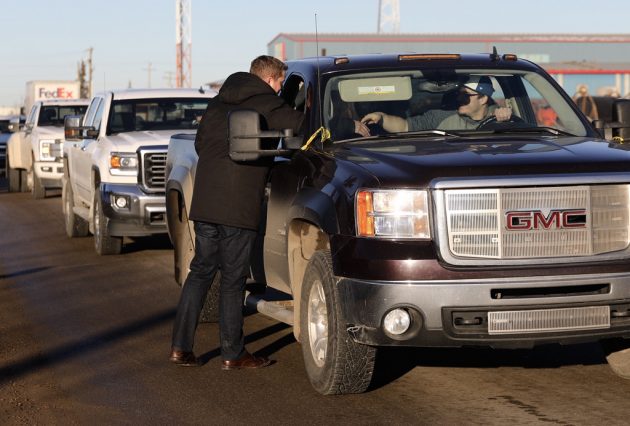 PHOTO: A 22 kilometre-long truck rally, on December 19, 2018, in support of energy workers/Andrew Scheer via Flickr

ROCKY MOUNTAIN HOUSE, Alta. – Speakers at another pro-pipeline rally in Alberta continued their attacks on Prime Minister Justin Trudeau on Saturday, saying if leaders in Ottawa don’t hear their message now, they will when a planned convoy arrives there in 2019.

Chad Miller with the group Oilfield Dads told the crowd gathered in Rocky Mountain House that the province is suffering its “worst recession turned depression” in a generation due to weakened oil prices, exacerbated by a lack of pipeline capacity.

“Even those that put away for the rainy days and then some have had to use their savings, and more, to try to weather this never-ending hard times scenario,” Miller said.

Numerous rallies and truck convoys have been held across Alberta and Saskatchewan in recent weeks to protest against federal actions that critics say will make building pipelines more difficult. Those include Bill C-69 to revamp the National Energy Board and Bill C-48, which would ban oil tanker traffic on British Columbia’s northern coast.

A convoy in Medicine Hat, Alta., last weekend attracted 650 vehicles, according to police, and groups are planning one in February that will travel from Western Canada to Ottawa.

“Today, I say to Ottawa, can you hear us yet?” Miller asked the crowd during Saturday’s rally.

“Don’t worry, you’ll see us in February when we convoy to Ottawa!”

A truck convoy was also held Saturday in Lloydminster, which straddles the Alberta-Saskatchewan boundary.

Earlier this month the federal government announced it would spend $1.6 billion to help energy companies struggling due to plunging oil prices.

But Jason Nixon, who represents Rocky Mountain House in the provincial legislature, said what Alberta really wants is pipelines.

“Trudeau, we don’t want your money. We want you to get out of the way,” Nixon said to the crowd in Rocky Mountain House.

The groups Rally 4 Resources and Canada Action say in a Facebook event post that the convoy to Ottawa is intended to end Feb. 20 on Parliament Hill. The post says letters voicing support for the industry, as well as individual and family photos, will be delivered to the Senate.

The page stresses that the event is not connected to the so-called yellow vest campaign, which also advocates for pipelines but is associated with opposition to Canada signing the United Nations migration pact.

“To be clear, we take issue with bad policies put forward by Justin Trudeau’s government, but we do not favour any political party. This movement is about supporting our families,” the Facebook post states.