It's handmade and it's cooked in a wood-burning oven, or it isn't a Montreal-style bagel. But as locals complain about smoky fine particle emissions, one bakery is turning to technology to stick to tradition—and city bylaws 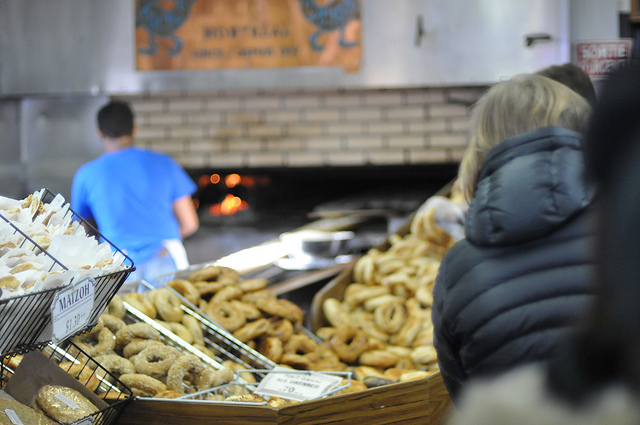 St-Viateur Bagel says it is investing in a new filter that will clean up its wood-burning oven emissions. PHOTO: M. Rehemtulla for QUOI Media Group/CC BY-SA 2.0

MONTREA—Robert Morena, co-owner of one of Montreal’s most-famous bagel shops, asked his neighbours to be patient this week, saying they’ll soon be able to breathe easier.

A new filter “from Europe” will soon be making its way across the Atlantic and when it’s installed, the fine particles emanating from his wood-burning oven will be within legal limits, assured the St-Viateur Bagel proprietor.

Montreal’s Mile End neighbourhood and surrounding area is known for its cafes, bagel stores and the historic haunts of its legendary denizens such as Mordecai Richler and Leonard Cohen.

But for those living around the internationally celebrated bagel shops, smoky winds and soot-laden laundry hanging from clotheslines is also part of the experience.

Sarah Gilbert said she and other neighbours would be at City Hall Monday night to ask the mayor to force all the city’s bagel stores to stop using wood-burning ovens “until they can do it right.”

“If you open your window you get a blast of smoky air,” she said. “You get soot on the laundry you hang out and on the patio and you have to hose it down.”

Most problematic, she said, is that the city knows the bagel stores are releasing more fine particles than legally allowed.

“None of the measures the bakeries have taken have proven effective,” she said. “So why are they allowed to continue?”

Using other baking methods “doesn’t change the taste,” she added. “They say it’s tradition. But I would say that they are burning wood not just for tradition, but for marketing purposes.”

Spokeswoman Gabrielle Fontaine-Giroux said in an email the city of Montreal is regularly conducting air-quality tests outside companies with wood-burning stoves and is trying to come up with the best approach and technologies to deal with the problem.

She added that one of Morena’s competitors has been fined twice in 2017 over its emissions.

“The fines were not paid and the matter is before the courts,” she said.

Morena said he has a “city-approved plan.”

“The (new) filter should be in by the end of the year,” he said. “We’re ordering a whole new chimney. It has to be built. We sent the city (all the information) before we ordered it.”

Morena wouldn’t say what kind of filter he bought or where it came from, only saying it came from “Europe.”

St-Viateur bagel will releasing the legal limit of fine particles as soon as the new technology is installed, he assured.

Morena said his bagel store will not stop using a wood-burning oven.

“The Montreal bagel—predicated on hand-rolled, wood-fired—that’s been our tradition for the last 60 years.”