The political tiff has pitted the two western provinces against each other. Ottawa, meanwhile, has so far done little to intervene 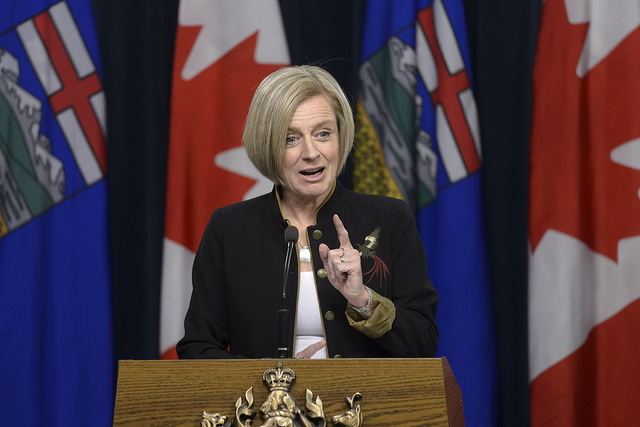 EDMONTON—The fight over Alberta oil coming to British Columbia has now escalated into a wine war.

“This is one good step to waking B.C. up to the fact that they can’t attack our industry without a response from us,” Notley said at a legislature news conference. “The Alberta Gaming and Liquor Control Board will put an immediate halt to the import of B.C. wine into Alberta.”

She said in 2017, there were 17.2 million bottles imported—the equivalent of about 1.4 million cases—with an estimated value of $70 million per year for B.C. wineries.

“The wine industry is very important to B.C. Not nearly as important as the energy industry is to Alberta and Canada, but important nonetheless,” said Notley.

“I’m also encouraging all Albertans: next time you’re thinking about ordering a glass of wine, think of our energy workers. Think of your neighbours. Think of our community. Think about our province, and maybe choose some terrific Alberta craft beer instead.”

Miles Prodan, president of the B.C. Wine Institute, said the estimated retail value of the wine going to Alberta is likely even higher than Notley’s estimate, around $160 million.

Alberta is the most important market for B.C. wine outside of sales within our own the province, Prodan said, adding that about 11 per cent of B.C. wine sold across the country is sold in Alberta.

The group, which represents 276 wineries, is disappointed that wine has been dragged into a political tiff, Prodan said.

“We hope that cooler heads prevail, that they realize the B.C. wine industry has very little if anything to do with government policy regarding oil pipelines. To us to be used as a pawn is difficult,” he said.

The $7.4-billion project, approved in November 2016 by the federal government, would triple capacity on the 1,150-km line, which runs from Edmonton to Burnaby.

It’s the linchpin component of Alberta’s fight to get a better overseas price for its oil, which is currently being sold at a discount on the North American market while the province racks up budget deficits over $10 billion.

Last week, B.C. Premier John Horgan’s NDP government announced it is looking at rules to limit any increase in the import of diluted bitumen until an independent panel can better analyze whether the system is safe and if it can adequately deal with a spill disaster.

Horgan has said the issue is about the B.C. government’s responsibility to keep the coastline and inland waterways safe.

Notley conceded the ban on B.C. wine may violate inter-provincial free trade rules, but said Alberta is moving ahead with it anyway.

“I honestly wish it did not have to be this way,” she said. “We don’t take this lightly. Albertans didn’t want or invite this fight.”

Horgan responded to the announcement by urging Alberta to “step back from this threatening position” and vowing to stand with B.C. wine producers.

“Our consultation on proposed new regulations hasn’t even begun, but Alberta has seen fit to take measures to impact B.C. businesses,” he said in a statement.

Horgan reiterated the provincial government’s position that it has every right to consult with citizens.

“If Alberta disagrees they can make that argument in the proper venue, in our court system,” he said.

The wine ban is the second trade retaliation Notley has announced. Last week, she suspended talks to buy electricity from B.C., a deal that would be worth $500 million a year to the westernmost province.

“We did play by the rules, and we secured the approval of a new pipeline to tidewater to export energy products that support tens of thousands of jobs across this country,” Notley said.

“Alberta will not stand by and be the only province impacted by another province’s refusal to play by the rules.”

The Opposition B.C. Liberals have branded the pipeline feud a trade war and called on Horgan to “stop playing games.”

The federal government has control over the cross-boundary pipelines, and Notley has called B.C.’s attempt to hinder the expansion an unconstitutional attempt to get around federal approval of the project.

Notley said the federal government has tools to resolve the impasse and that she will continue to push Prime Minister Justin Trudeau on it.

“We are actively preparing measures to get Ottawa to step up and B.C. to back down,” she said.

—With files from Gemma Karstens-Smith in Vancouver