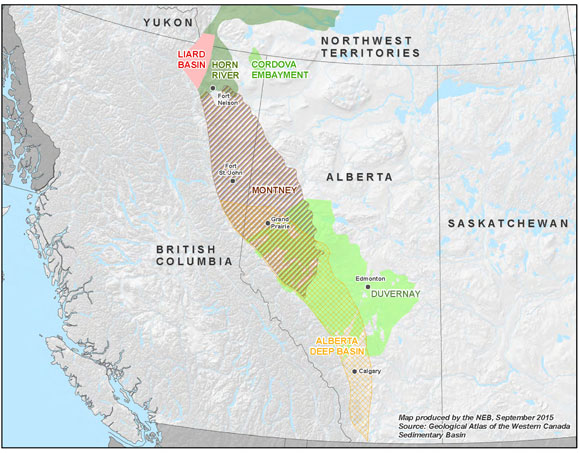 Location of the Liard Basin (top left corner on the border of B.C., Yukon and Northwest Territories) as it relates to other major Western Canada gas fields. PHOTO: NEB

CALGARY—One of the world’s largest supplies of shale natural gas is sitting beneath an area spanning the British Columbia, Yukon and Northwest Territories boundaries, according to a new study.

But with dismal commodity prices and no immediate way to export the gas to global markets, the prospect of a development bonanza in the Liard Basin is far from certain.

The study was a joint effort by the National Energy Board, the B.C. Oil and Gas Commission, the Yukon Geological Survey, the Northwest Territories Geological Survey and the British Columbia Ministry of Natural Gas Development.

The NEB said Wednesday that the Liard is Canada’s second-largest known gas resource after the Montney, which straddles B.C. and Alberta. Globally, it ranks ninth, according to the federal energy regulator.

It’s estimated to contain 219 trillion cubic feet of marketable natural gas—enough to meet all of Canada’s demand for 68 years at 2014 consumption rates.

Mike Johnson, technical leader of hydrocarbon resources at the NEB, said it was the first detailed look at the Liard and he was taken aback by its size.

“We expected big,” he said. “It was bigger than we thought it was going to be.”

The bulk of the Liard marketable resource—167 trillion cubic feet—is in British Columbia, with 44 tcf in the Northwest Territories and eight tcf in the Yukon segment.

“This report shows our long-term prospects are stronger than before and that the Liard Basin can create economic activity and jobs in our province for a very long time to come,” said Rich Coleman, B.C.’s natural gas development minister.

There are already pipelines in the region, but links would need to be built to connect that gas to its logical outlets: liquefied natural gas terminals planned for Prince Rupert or Kitimat, B.C., which would enable exports to Asia.

However, it’s unclear whether the companies behind those export proposals—whose price tags can run into the tens of billions of dollars—will ultimately decide to go ahead.

Chevron Canada and Australia’s Woodside Petroleum have teamed on a project to develop gas, mostly from the Liard Basin, and liquefy it at a terminal planned for the Kitimat area.

The partners expect to have drilled five wells in the Liard by year-end as they continue to appraise their holdings, said Ray Lord, a spokesman for the project.

“These results are confirming, I think, what we’ve felt all along—that we are dealing with a world-class resource,” he said.

But Lord provided no timeline for when the companies would make an official go-ahead decision.

Northwest Territories Premier Bob McLeod said that with the downturn in oil and gas prices, pretty much all the exploration companies have “packed up and left” the territory.

“It’s a high-cost environment and it’s usually the first place that’s affected when prices go down,” he said.

But long-term demand forecasts give him hope.

“We see this as an opportunity to get ready,” he said.

Yukon Energy, Mines and Resources Minister Scott Kent said his government is using the slowdown to work on baseline testing for water and seismic activity.

“Somebody once told me that winter’s a good time to buy a straw hat, so that’s what we’re doing now,” Kent said. “We’re doing a lot of that work and we know the markets will come back. We know British Columbia’s working hard to get LNG offshore.”