The report shows that all G20 countries, of which Canada is a member, have inadequate laws and regulations when it comes to the wildlife trade 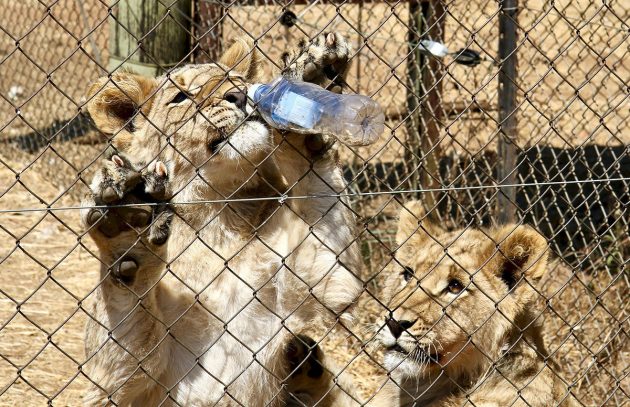 In South Africa, lion cubs can be used to provide tourists with activities such as bottle feeding and walking experiences. Adult lions are used for the canned-hunting trade where they are shot by trophy-hunters who only want their heads. Their bodies are then also exported into the traditional medicine trade. However, South Africa recently announced it would end such practices.
Credit: Blood Lions (CNW Group/World Animal Protection)

TORONTO — As G20 leaders meet for a Global Health Summit, the World Animal Protection is urging them to prioritize pandemic prevention and to curb the global commercial wildlife trade due to its role in this pandemic and previous epidemics.

Recent UN and scientific reports recognize the wildlife trade as a top driver of pandemics and the likely origin of COVID-19, leading G20 countries like China, Germany and Italy, which holds the G20 Presidency, to take steps to curb it.

“Animal suffering exists at every stage of this trade and the risk of zoonotic diseases can increase significantly as these animals are traded up the supply chain to meet demand in wealthy countries like Canada,” said Melissa Matlow, Campaign Director for World Animal Protection in a statement. “It’s time for Canada to join other global leaders in taking action on this issue because the current vaccines will not prevent the next pandemic.”

Matlow says there is strong scientific evidence and support among MPs from all parties and other Canadians for government action. A petition recently tabled in the House of Commons by Conservative Health Critic and Member of Parliament for Calgary Nose Hill, Michelle Rempel Garner is good evidence of this.

The charity says this is a global problem requiring a global solution and Canada plays a significant role. Their research shows that between 2014 and 2019, more than 1.8 million wild animals were imported into Canada from 76 countries, including known emerging disease hot spots. Ninety-three per cent of these animals seem not to be subject to any permits or pathogen screening.

The charity’s latest report, “Protecting our world from future pandemics” shows that all G20 countries, of which Canada is a member, have inadequate laws and regulations when it comes to the wildlife trade. This includes taking wild animals from their natural habitat and trading them for non-essential purposes and luxury products without addressing the many health risks.

Intensive farming of wildlife is also an issue. And there is no global body or mechanism to address the disease risks associated with the wildlife trade despite its recognized role as a major transmission route for deadly pathogens.

The report singles out Canada for not having adequate legislation across the country to address the health and welfare of wildlife intensively farmed for fur or meat or the growing exotic pet trade.

Animals raised for fur are often kept in overcrowded conditions which causes them stress and makes it easier for diseases to spread. An example of this has been COVID-19 outbreaks on mink farms in Canada and globally.

However the report does acknowledge some G20 countries for having some good laws, like South Africa ,which recently announced it plans to stop the captive breeding of lions for hunting, entertainment and to end the supply of bones and body parts for the traditional medicine trade.

World Animal Protection is encouraging Canada and other G20 leaders to adopt a One Health, One Welfare approach to preventing future pandemics as the wellbeing of humans, animals and the planet is interconnected.