Excessive phosphorus is the primary cause of algae in Lake Erie, which is harmful to humans, animals and the environment; a plan to reduce phosphorus levels has been put to the public for consultation until May 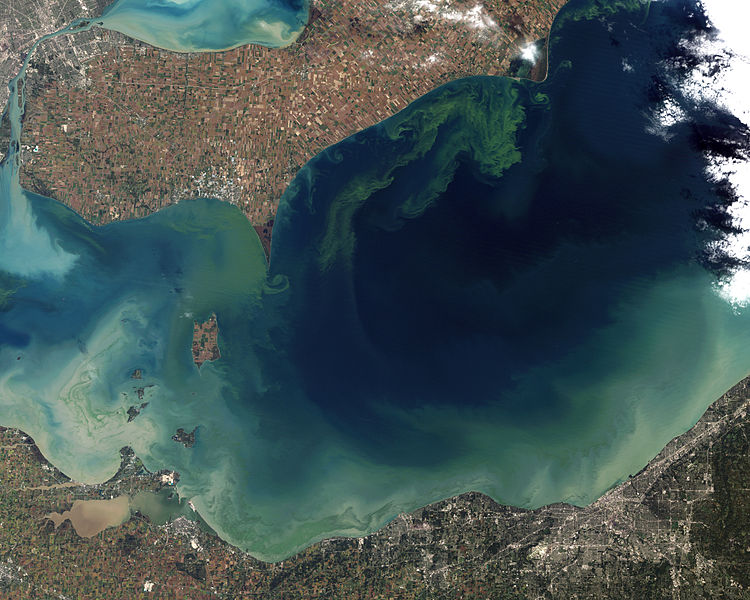 This satellite image of an algal bloom in the eastern portion of Lake Erie, taken Oct. 9 2011, shows green slime stretching from Cleveland in the south to Windsor in the north. This was one of the worst blooms Lake Erie had experienced in decades. PHOTO: NASA Earth Observatory

OTTAWA—As the weather gets warmer and spring approaches, provincial and federal officials are already looking towards summer, when harmful and annoying algae can choke our Great Lakes.

On Mar. 10, the Government of Canada and the Province of Ontario released a draft action plan to reduce phosphorus in Lake Erie by 40 per cent, to stem the growth of toxic algae in the lake.

Reducing the amount of phosphorus entering Lake Erie is the best way to minimize algal blooms, which can be harmful to human health and the environment. While phosphorus is an essential nutrient for plant and animal life, scientists have identified that excess phosphorus is the cause of algal blooms in the lake.

Lake Erie is the shallowest and most biologically productive of the Great Lakes, and the high amount of phosphorus it receives makes it highly sensitive to blue-green algae—which can contain harmful toxins.

The plan released by the feds and the province identifies actions that can be taken by governments, conservation authorities, Indigenous communities and partners in key sectors, such as agriculture and industry, to achieve the goal of reducing phosphorus in Lake Erie by 40 per cent.

Stakeholders and community members are encouraged to comment on the draft action plan before May. 9 2017. This input will inform the final action plan for the Canadian side of Lake Erie, an initiative that supports Ontario’s Great Lakes Protection Act.

“This proposed action plan to reduce phosphorus levels in Lake Erie is based on collaboration with our partners to ensure that Lake Erie remains drinkable, swimmable and fishable,” said Glen Murray, Ontario minister of the Environment and Climate Change.

Through the Great Lakes Water Quality Agreement, Canada and the U.S. are committed to finalizing domestic action plans for Lake Erie by February 2018.

Given the Trump administration’s recent decision to slash funding to the American Great Lakes Restoration Initiative by as much as 97 per cent, the future of Lake Erie preservation plans on the U.S. side, and collaboration between the two governments on the issue, remains in question.

Ontario’s Great Lakes Basin is not only the largest freshwater system on Earth—holding 20 per cent of the planet’s fresh water—it is also home to 40 per cent of Canada’s economic activity, 95 per cent of Ontario’s agricultural land, and most Ontarians receive their drinking water from the lakes.