Rising temperatures are expected to bring increasingly devastating forest fires and more frequent floods, but Canada is nowhere near ready to protect vital infrastructure, such as roads, ports and airports, a new report says 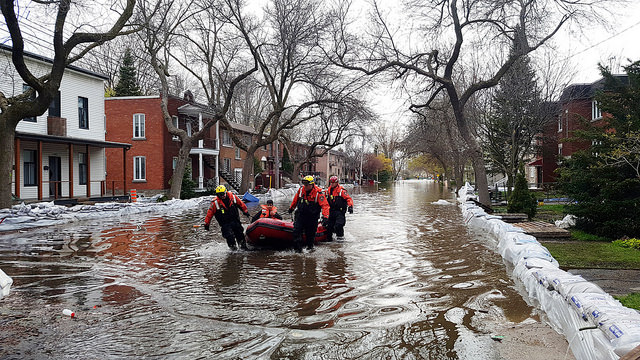 The report warns Ottawa is not prepared for massive storms or the frequent floods and forest fires expected to accompany climate change. A flooded Montreal street during the 2017 Quebec flooding seen here. PHOTO: Exile on Ontario St/Flickr

OTTAWA—The federal government is nowhere near ready for the massive storms and more frequent floods and fires that are expected to result from climate change, warns Canada’s environment commissioner.

In her autumn annual reports, Julie Gelfand asked whether Ottawa will be able to protect more than $66 billion in federal assets like bridges, roads and airports, while also continuing to provide services, when fires, floods and extreme storms hit hard.

The answer, she said, is a resounding ‘No.’

“The federal government is not prepared to deal with the impacts of climate change that we are all feeling right now,” Gelfand told a news conference Oct. 2.

A lack of federal preparation is her “biggest concern” coming out of the latest round of audits, she said: only five of the 19 departments she looked at have even figured out where the risks are from climate change, let alone how best to deal with them.

She said Transport Canada was the gold standard in both assessing risk and preparing to mitigate for it, including concerns about ports being affected by rising sea levels, and railways impacted by extreme cold or thawing permafrost.

The other 14 departments, including National Defence and Infrastructure Canada, all indicated it would be nice to have such risks identified but haven’t done anything about it—meaning Ottawa doesn’t come close to having a full picture of the threats climate change poses to its assets and activities.

Gelfand was also critical of the government for repeatedly promising to cut emissions, but never actually doing so.

Since 1992, Canada has developed multiple plans to cut emissions and made four international targets to do so but has never come close to meeting a single one, she said. In fact, emissions have gone up more than 15 per cent since then.

As of 2015—the latest year for which emissions data is available—Canada was nearly 200 million tonnes shy of that goal and the commissioner noted that with expected increases in emissions in some areas, the actual amount to cut by 2030 is closer to 230 million tonnes.

Gelfand also found Canada has introduced just two regulations to help meet emissions targets and failed to introduce regulations for oil and gas and other high emitting industries as planned.

One bright spot in the reports gave high marks to the government’s efforts to encourage clean technology innovation. An audit of three federal funds for clean energy and other technology development showed the money had been properly spent and was easily tracked.

However, the commissioner does want Canada to do a better job at showing what the impact of the funds has been, including what kind of emissions reductions specific investments will generate.

Many of the concerns Gelfand raised date back to previous governments. While the current Liberal government has done some positive work in these areas, she said, concrete targets and priorities are needed so all departments and provinces know what they have to do and by when.

“Climate change is one of the defining issues of this century,” said Gelfand. “It will require a whole of government approach. It’s time to move from planning to action.”