Rick Perry claimed "ocean waters and this environment that we live in" are the main culprits behind global warming, adding that challenging the scientific consensus doesn't make a person a "Neanderthal" 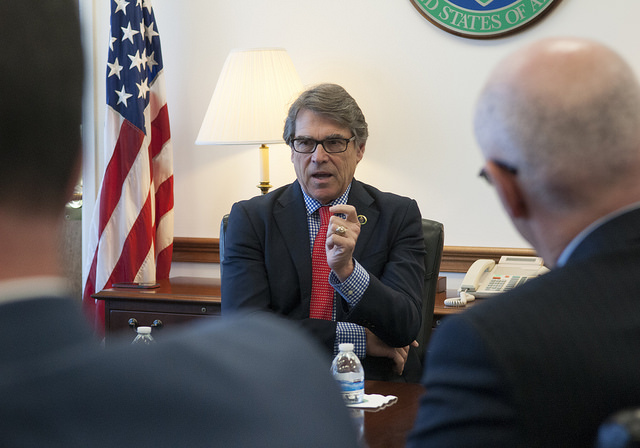 The views are at odds with the scientific consensus, but in line with other Trump administration officials, such as EPA head Scott Pruitt. PHOTO: Ken Shipp/DOE

WASHINGTON‐Energy Secretary Rick Perry said June 19 he does not believe carbon dioxide is a primary contributor to global warming, a statement at odds with mainstream scientific consensus but in line with the head of the Environmental Protection Agency.

Asked on CNBC’s “Squawk Box” whether carbon emissions are primarily responsible for climate change, Perry said no, adding that “most likely the primary control knob is the ocean waters and this environment that we live in.”

Perry’s view is contrary to mainstream climate science, including analyses by NASA and the National Oceanic and Atmospheric Administration. The EPA under President Donald Trump recently removed a web page that declared “carbon dioxide is the primary greenhouse gas that is contributing to recent climate change.”

Taking down the web page came after EPA Administrator Scott Pruitt, appearing on “Squawk Box” in March, said “there’s tremendous disagreement about the degree of impact” of carbon dioxide and other greenhouse gases on the planet.

“So, no, I would not agree that (carbon dioxide) is a primary contributor to the global warming that we see,” Pruitt said.

Perry, like Pruitt, rejected the scientific consensus on climate change.

“This idea that science is just absolutely settled and if you don’t believe it’s settled then you’re somehow another Neanderthal, that is so inappropriate from my perspective,” he said.

Being a skeptic about climate change issues is “quite all right,” Perry added, saying skepticism is a sign of being a “wise, intellectually engaged person.”

Recently, The Associated Press sent Pruitt’s comments to numerous scientists who study climate. All seven climate scientists who responded said Pruitt was wrong and that carbon dioxide is the primary driver of global warming.

Perry, in his TV appearance Monday, said there should not be a debate about whether the climate is changing or if humans have an effect on the climate. Instead, he said the debate should be on “what are the policy changes that we need to make to affect that?”

Far from being a key cause of climate change, “the world’s oceans are actually another victim of greenhouse pollution,” Wolf said. “Our oceans absorb millions of tons of carbon dioxide a day, making them dangerously acidic.”

NASA and NOAA reported in January that earth’s 2016 temperatures were the warmest ever. The planet’s average surface temperature has risen about 2 degrees Fahrenheit since the late 19th century, “a change driven largely by increased carbon dioxide and other human-made emissions into the atmosphere,” the agencies said in a joint statement.

Earlier this month, Trump announced he will withdraw the United States from the Paris climate accord. The agreement signed by 195 nations in 2015 aims to decrease global carbon emissions in an effort to head off the worst predicted effects of global warming, including worsening storms, catastrophic droughts and city-drowning sea level rise.

The Trump administration has also moved to roll back or delay numerous rules approved by the Obama administration to cut pollution from mining operations, oil and gas wells and coal-fired power plants.