Enbridge Gas partners with City of Hamilton for carbon-negative bus

Renewable natural gas bus will use and divert 450 tonnes of organic waste from the landfill in one year, according to company 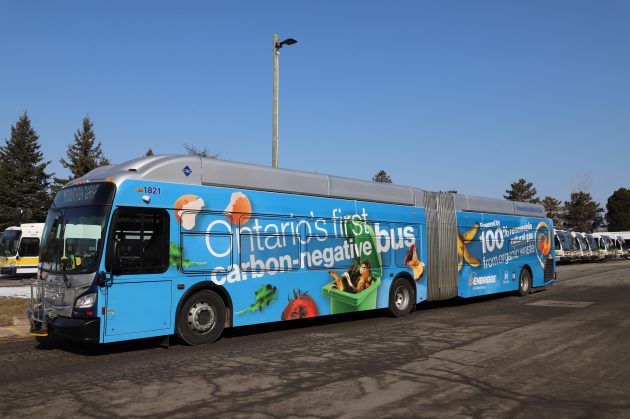 In one year, the HSR RNG bus will use and divert 450 tonnes of organic waste from the landfill. That’s equivalent to 138 garbage trucks, while also displacing CO2 emissions from 36,000 litres of diesel consumed in a year.

RNG vehicle fuel is upgraded biogas; the gaseous product of the decomposition of organic waste from homes and businesses that has been processed into green fuel. This green HSR bus operates with carbon-negative RNG—fuel that goes beyond net-zero—provided from the StormFisher facility in London, Ontario, creating a circular economy in the province; achieving climate change targets, diverting waste from landfills, and supporting economic development, all while decreasing CO2 emissions and providing transit customers with comfort and reliability.

“We are excited to work with the City of Hamilton and Enbridge on this transformational initiative. The use of renewable natural gas as a carbon-negative fuel for public transit is a great example of the steps that need to be taken as we move forward into a net-zero carbon future, and supporting economic development and jobs in Ontario,” says Brandon Moffatt, Vice-President, Development & Operations, StormFisher Ltd., in a prepared statement.

RNG buses cost half compared to electric buses and have a similar fuel price as diesel. Diesel buses can be replaced 1-for-1 with RNG without compromising performance. Like diesel, RNG operates during freezing weather conditions and refuelling takes minutes, not hours. This demonstrates that municipalities can have carbon-neutral transit today without sacrificing performance, reliability or range.

“The HSR is a prime example of a major transit authority recognizing the environmental benefits and financial value of RNG,” said Cynthia Hansen, President of Enbridge Gas. “We’re pleased to support their efforts by supplying RNG, a cleaner fuel option that will help fight climate change in the region.”