Ecuadorians face off against Chevron in Ontario court in $9.5B environment case

Long-running dispute has already been batted through court systems in Ecuador and U.S., where judges have turned out two different verdicts 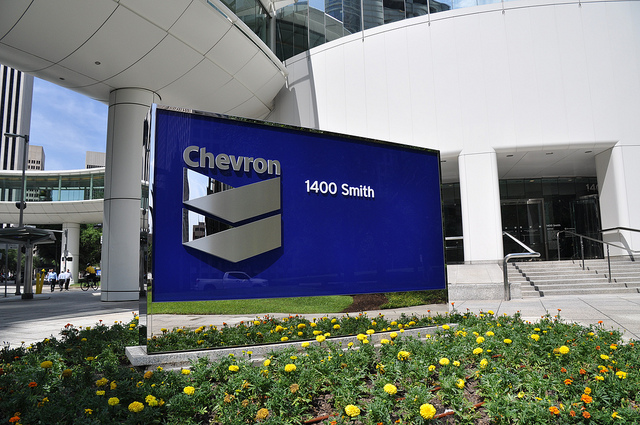 Though the Ecuadorian villagers won their case against Chevron in Ecuador, with no assets in the country, the company could not be compelled to pay. PHOTO: Jonathan McIntosh, via Flickr

TORONTO—Lawyers for a group of Ecuadorian villagers and oil giant Chevron squared off in court once again on Sept. 15 in the latest skirmish of a seemingly endless legal war that has already cost tens of millions of dollars to wage and has billions more at stake.

The Ecuadorians are trying to collect on a US$9.5-billion award—one of the largest ever to arise out of environmental destruction—they won against Chevron in Ecuador. Because Chevron has no assets in the South American country, they have turned to courts in several other countries in an effort to have the judgment enforced.

At issue during this week’s proceedings before Ontario Superior Court Justice Glenn Hainey, essentially, are the parameters of a future trial at which the plaintiffs hope to force Chevron Canada—headquartered in Mississauga, Ont.—to cough up the money its parent owes them.

One of the pretrial motions heard over the past three days was the plaintiffs’ call on Hainey to strike Chevron’s statement of defence on the grounds the issues have already been thrashed out in Ecuador.

“If we are going to respect the foreign courts like we would expect them to respect our courts, you don’t relitigate stuff,” lawyer Alan Lenczner, who represents the plaintiffs, said outside court.

The defence countered it would be unfair to deny it the opportunity to make a full and vigorous defence, especially since it contends that the huge judgment in Ecuador was obtained fraudulently.

It might seem like a “blinding statement of the obvious,” Chevron lawyer Larry Lowenstein told Hainey on Thursday, but a foreign judgment arising out of “bribery and corruption” cannot stand.

At least two courts in the United States have bought the fraud argument but that battle continues.

The defence also spent hours arguing the case should be thrown out on the grounds that Chevron Canada and U.S.-based Chevron Corp. are two entirely separate entities—that there is no legal basis to try to hold the Canadian subsidiary, which had nothing to do with the disaster in Ecuador, accountable for the sins of its parent company.

Lenczner who represents the plaintiffs, told Hainey earlier in the week that the notion that the two companies are completely separate was nonsense, arguing Chevron Canada is a “cash cow” that sends billions to its controlling parent.

It’s not clear when Hainey will rule on the various motions or when a trial in Ontario might happen.

The case arose because Texaco, which is now owned by Chevron, dumped billions of litres of toxic oil-drilling waters into hundreds of open-air pits. Chevron has argued Texaco cleaned up the mess, but that wasn’t the case.

Activists say the affected area sees, among other problems, the highest rates of childhood leukemia in the country—130 per cent more frequent cancer deaths than elsewhere, and 150 per cent higher rates of miscarriages.

The lawsuit, initially filed in 1993 on behalf of 30,000 Ecuadorians, took until late 2013 for the US$9.5-billion judgment to be finalized, setting off a new fight to collect—in hopes the money will go toward remediating the damage.

Lenczner said he was confident a trial in Ontario will take place—but expressed doubts whether he would live to see the case concluded. In the interim, he said, people in Ecuador continue to die from the poison in their midst.

“It’s disastrous. A number of them die every year,” Lenczner said.

Lawyers for the villagers have also turned to courts in Brazil and Argentina to collect. The Canadian end of the legal fight has already been to the Supreme Court of Canada, which ruled last year that the case can proceed in an Ontario court.

“Canadian courts, like many others, have adopted a generous and liberal approach to the recognition and enforcement of foreign judgments,” the court ruled.