The Netherlands has teamed with Japan and the U. N. Environment Program to create a Global Center of Excellence to combat flooding caused by climate change. The Dutch struggle to keep their country dry has been a fact of life for centuries 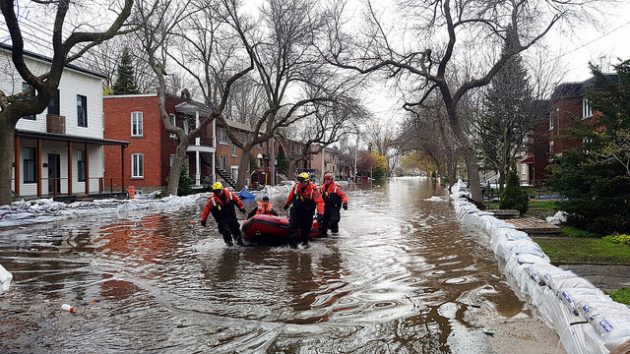 Flooding has become an increasingly common feature of extreme storms over the last decade. PHOTO: Exile on Ontario St/Flickr

SPAKENBURG, Netherlands—On a calm, clear morning, historic wooden fishing boats float tranquilly on the glassy waters of the Dutch harbour of Spakenburg. Yet just over a century ago, they were slamming through the houses lining the harbour as a powerful storm unleashed flooding that devastated this picturesque fishing village.

These days, an innovative new self-raising dike protects the village on the edge of Eemmeer Lake, 50 kilometres (30 miles) southeast of Amsterdam. The 300-meter (984-foot) long barrier is concealed in the sidewalk when not in use, and is lifted up to 80 centimetres (31 inches) by the very floodwaters it is designed to keep out.

It’s just the latest example of Dutch ingenuity and planning in this low-lying nation’s constant battle with water—and increasingly, technology like it is becoming a lucrative Dutch export.

“We live here in a very vulnerable place,” said Roeland Hillen, director of the Dutch Flood Protection Program. “We have to adapt to survive.”

That message resonates with many other flood-prone countries now attending climate change talks in Bonn, where delegates from some 195 nations have gathered to discuss rules for implementing the 2015 Paris climate accord. The meeting in the former German capital, which runs until Friday, is being presided over by Fiji, one of the many small island nations threatened by rising sea levels.

“We will feel the impact of climate change all over the world most profoundly through water,” said Henk Ovink, the Netherlands’ Special Envoy for International Water Affairs, who is at the Bonn conference.

The Dutch government teamed up earlier this year with Japan and the U. N. Environment Program to create a Global Center of Excellence on Climate Adaptation in the Netherlands that will be formally launched Tuesday on the sidelines of the Bonn conference.

The centre aims to “support those who struggle to put climate adaptation effectively into practice in all parts of the world,” the government said.

Housing the water expertise centre in the Netherlands was a no-brainer. Some 26 per cent of this nation of 17 million people lies below sea level and 29 per cent is vulnerable to river flooding. The Dutch struggle to keep the country dry has been a constant fact of life for centuries.

The centre will have bases in the northern city of Groningen and in a new floating office in the port city of Rotterdam.

The Dutch government earmarks 1 billion euros (US$1.16 billion) per year to keep up its defences against high water. The money is spent on maintaining and strengthening dikes and levees and on other water mitigation measures. By 2050, the country aims to reinforce some 1,900 kilometres (1,180 miles) of dikes and levees, Hillen said.

But while the costs are high, expertise and technology developed by the Dutch are becoming increasingly valuable commodities. Annual exports of Dutch water technology and expertise have doubled since 2000 to just under 8 billion euros ($9.3 billion) a year.

“Water is an asset and a threat,” said Ovink.

Recent contracts involving Dutch companies include Netherlands-based Arcadis being selected as part of a consortium involved in a 10-year “seawall resiliency project” to strengthen a century-old San Francisco harbour wall that protects an area including the city’s beloved Fisherman’s Wharf.

Back in Spakenburg, experts say the self-raising dike is a good example not only of new techniques for holding back rising tides, but also how to integrate such barriers in spatial planning. Sinking the wall into the sidewalk means that it does not spoil views of the picturesque harbour for tourists or locals. The technology already is being put to use in projects in England, Vietnam and China.

Ovink stresses that it is just one of a multitude of defences the Dutch have developed to hold water at bay.