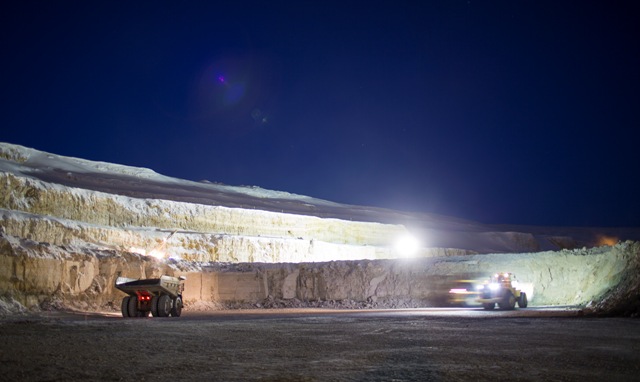 About 90 km outside the Attawapiskat First Nation, the open pit Victor Mine opened in 2008. PHOTO: De Beers

TORONTO—An environmental group is accusing a diamond mining company of failing to report mercury levels at a mine in northern Ontario, a claim the company has swiftly rejected.

Wildlands League alleges De Beers Canada has failed to report properly on mercury and methylmercury levels in five out of nine surface water monitoring stations at its diamond mine near Attawapiskat First Nation.

The group says the reporting failure has been going on at the company’s Victor Diamond Mine site since 2009 and alleges this is a violation of its certificate of approval and an offence under the Ontario Water Resources Act.

“Governments are delegating the monitoring of these industrial developments to the industry themselves,” said Wildlands League director of conservation Anna Baggio.

“Self monitoring is going on straight across Canada. What we’re finding is it is woefully deficient in this case and we need the monitoring to work because so many of the promises made by governments and proponents in these environmental assessments rely on monitoring.”

A spokesman for De Beers denied the allegations.

“To suggest that we have not been reporting in the appropriate manner for seven years is inaccurate,” Tom Ormsby said in an email.

“Our reporting requirements were expanded to a more robust and comprehensive program when the mine began operations in mid 2008. Our program now has 200 groundwater wells and 15 surface water wells from which we collect approximately 3,200 samples on an annual basis.”

Wildlands League who said they brought their concerns to the Ministry of Environment and Climate Change 18 months ago, but they say since the province didn’t act, they went for a private prosecution.

Anyone who has reasonable grounds to believe an offence has been committed can go to a justice of the peace or provincial court judge, who determines if a summons or warrant should be issued to compel an accused person to come to court to answer the charge.

A ministry spokeswoman said they are taking the concerns raised by Wildlands League seriously.

“It’s important to note that the ministry has previously provided direction to De Beers Canada regarding their monitoring and reporting requirements for the operation of the Victor Diamond Mine,” said Jan Nguyen in an email.

“As a result, improvements were made to the 2016 reporting process. Following up on that direction, there have been meetings between ministry staff and De Beers as well as a follow-up in writing to ensure the company follows all of the conditions of their permits and approvals.”

Wildlands League said the summons was delivered to De Beers on Monday and a first appearance is scheduled in a Toronto court for Jan. 12.

Methylmercury is a highly toxic compound that can migrate through the body’s cells into the brain and through the placenta, according to Environment and Climate Change Canada.

High mercury levels can be lethal and can also lead to “impaired reproduction, growth, neuro-development, and learning ability, in addition to behavioural changes,” the federal ministry says on its website.

Ormsby said mercury in the area near the diamond mine occurs naturally that “has been present in the local environment long before the construction of the mine.”

“Mercury is not used in the mining process at all,” he said.