The largest-known release of methane in U.S. history spewed an estimated 107,000 tons of the climate-changing gas over 16 weeks 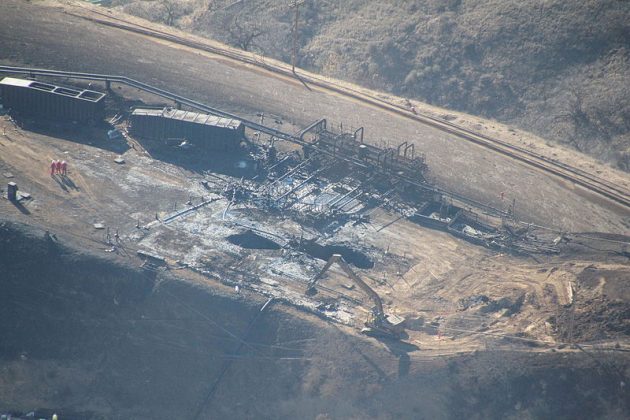 San Diego-based Sempra had estimated costs of $330 million in its annual report in February, but that was before courts forced its Southern California Gas Co. to continue paying to house thousands of relocated residents.

The gas leak at the Aliso Canyon storage facility was the largest-known release of climate-changing methane in U.S. history, according to scientists. It spewed an estimated 107,000 tons of methane over 16 weeks.

The blowout reported Oct. 23 sickened residents in Porter Ranch and surrounding San Fernando Valley suburbs who complained of headaches, nausea, nosebleeds and other symptoms as the foul-smelling gas wafted over neighbourhoods.

SoCalGas has pointed out that public health agencies have found the air quality in the area has returned to normal, though many residents have continued to complain of maladies since the leak was capped in February. Some 3,700 households remain in short- or long-term housing, many because of fears of returning until they are assured their homes are clean and safe.

Dennis Arriola, president and chief executive of SoCalGas, said that 54 per cent of relocated residents had returned home and more were returning each week.

He said the latest cost estimates, which were included in Sempra’s first-quarter earnings, reflected the expectation the company will continue to pay housing for relocated families until June 7 when another court hearing is scheduled.

Judges have repeatedly extended orders for the company to pay relocation costs while the Los Angeles County Department of Public Health tests homes for carcinogens and other compounds found in natural gas.

The company has begun moving families from hotels to apartments, which it said was being done to provide more space and amenities such as kitchens. Arriola said it also allowed the company to cut costs because it won’t have to pay $45 per person each day for meals.

Arriola said the lion’s share of the latest cost estimate—70 per cent—is for relocation expenses. The other 30 per cent is split equally between costs for stopping the leak and investigating its cause; and legal and other costs.

The estimates do not account for possible damages from 138 pending lawsuits or civil or criminal penalties that could be brought by a swarm of government agencies investigating the leak.

The company said it has four types of insurance policies to cover more than $1 billion in costs. In its first-quarter earnings report, Sempra said SoCalGas has recorded an insurance receivable of $660 million.

Sempra said the estimated costs had no material impact on earnings in the quarter. Net income for Sempra was down 28 per cent from the same quarter last year and earnings fell short of Wall Street expectations.

Arriola said the company expects an investigation into the cause of the leak to be completed by early 2017.

He reiterated plans to complete a battery of tests on the remaining 114 wells at the field so the company can resume storing gas underground.

Aliso Canyon is the largest gas storage facility west of the Mississippi River and a major source of energy for the Los Angeles area. Energy officials have warned of possible blackouts this summer if it is not able to operate.