We are conducting the largest ever global air pollution experiment 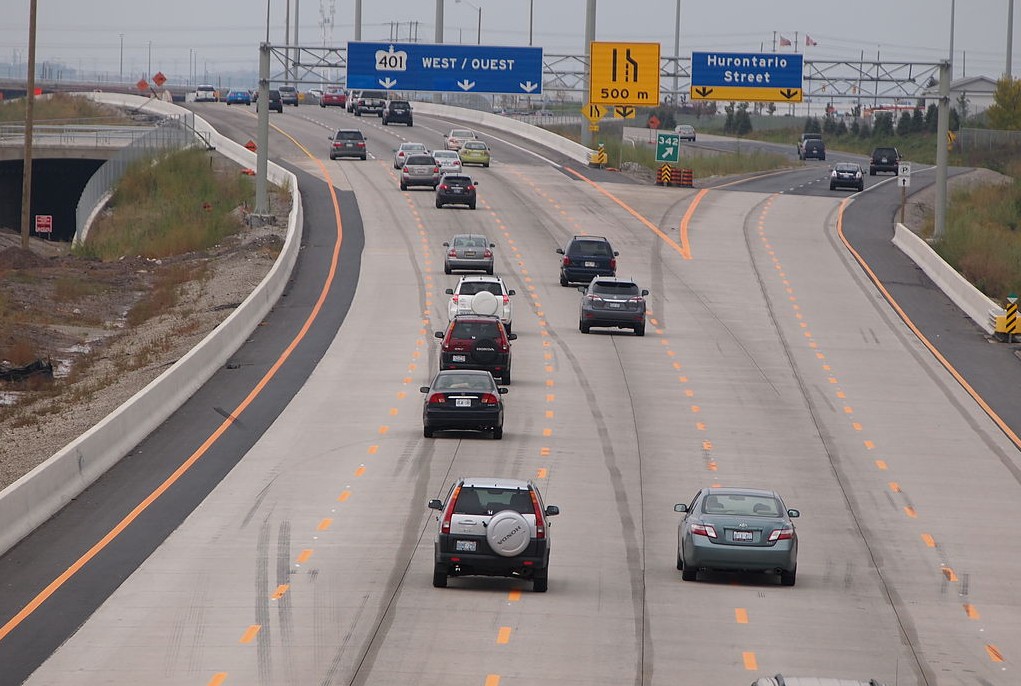 Traffic on Highway 401 in Toronto. Most NO₂ comes from road transport and power plants. PHOTO: Ryan Stubbs, via Wikimedia Commons

The COVID-19 pandemic has caused industrial activity to shut down and cancelled flights and other journeys, slashing greenhouse gas emissions and air pollution around the world. If there is something positive to take from this terrible crisis, it could be that it’s offered a taste of the air we might breathe in a low-carbon future.

The World Health Organisation (WHO) estimates that about 3 million people die each year from ailments caused by air pollution, and that more than 80% of people living in urban areas are exposed to air quality levels that exceed safe limits. The situation is worse in low-income countries, where 98% of cities fail to meet WHO air quality standards.

Measurements from the European Space Agency’s Sentinel-5P satellite show that during late January and early February 2020, levels of nitrogen dioxide (NO₂) over cities and industrial areas in Asia and Europe were lower than in the same period in 2019, by as much as 40%.

Two weeks after the nationwide lockdown was announced on March 23 in the UK, NO₂ pollution in some cities fell by as much as 60% compared to the same period in 2019. NASA revealed that NO₂ pollution over New York and other major metropolitan areas in north-eastern USA was 30% lower in March 2020, compared to the monthly average from 2015 to 2019.

Most NO₂ comes from road transport and power plants, and it can exacerbate respiratory illnesses such as asthma. It also makes symptoms worse for those suffering from lung or heart conditions. NO₂ emissions have been a particularly thorny problem for Europe, with many countries in breach of EU limits.

In a sense, we are conducting the largest ever global air pollution experiment. Over a relatively short period of time, we’re turning off major air pollutant sources in industry and transport. In Wuhan alone, 11 million people were in lockdown at the height of the outbreak there. Across China, over half a billion. China normally emits in excess of 30 mega tonnes of nitrogen oxides per year, with estimates for 2019 reaching 40 mega tonnes.

China emits over 50% of all the nitrogen dioxide in Asia. Each tonne of NO₂ that isn’t emitted as a result of the pandemic is the equivalent of removing 62 cars per year from the road. So you could estimate that over China, even a moderate 10% reduction in NO₂ emissions is equivalent to taking 48,000 cars off the road. But the 40% drop in NO₂ on 2019 levels for January and February in some areas equates to removing a whopping 192,000 cars.

That’s an indication of what could be achieved permanently for air quality if car use was phased down and replaced with electrically powered mass transit. Electrifying transport in this way, with expanded train lines and more electric cars and charging stations, would slash tail pipe emission of air pollutants such as NO₂.

But electric vehicles are only as clean as the electricity that powers them. The recent improvements in air quality could be made permanent by replacing fossil fuel generation with renewable energy and other low-carbon sources. Reducing monthly NO₂ emissions from electricity generation by 10% would be the equivalent of turning off 500 coal power stations for a year.

Ironically, by shutting down swaths of the global economy, COVID-19 has helped expose another respiratory health crisis. The ensuing lockdowns have shown the improvements to air quality that are possible when emissions are reduced on a global scale.

The pandemic could show us how the future might look with less air pollution, or it may just indicate the scale of the challenge ahead. At the very least, it should challenge governments and businesses to consider how things can be done differently after the pandemic, to hold on to temporary improvements in air quality.