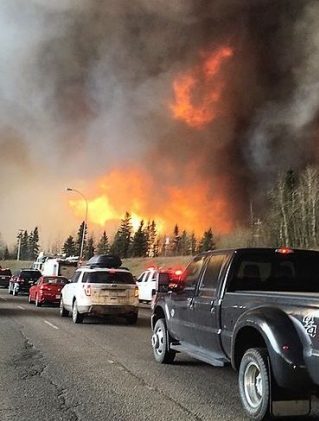 The recent wildfire, which tore through Fort McMurray earlier this month, has ignited debate in Canada over the role climate change plays in natural disasters. PHOTO: DarrenRD, via Wikimedia Commons

WASHINGTON—A new report is warning that climate change-related disasters are putting billions of people and trillions of dollars in assets at risk.

Released by the Global Facility for Disaster Reduction and Recovery—an organization managed by the World Bank—the report says the world is “ill-prepared” for a rise in disasters as rising urban populations concentrate both infrastructure and people.

“With climate change and rising numbers of people in urban areas rapidly driving up future risks, there’s a real danger the world is woefully unprepared for what lies ahead,” John Roome, the World Bank Group’s senior director for Climate Change, said.

“Unless we change our approach to future planning for cities and coastal areas that takes into account potential disasters, we run the real risk of locking in decisions that will lead to drastic increases in future losses,” he added.

Overall, the World Bank report found annual total damages from disasters have been increasing for decades. The analysis also showed population growth and rapid urbanization could put 1.3 billion people and $158 trillion in assets at risk from river and coastal floods by 2050.

Designed to spur governments to action, the report says groups should prioritize implementing reliable systems to transmit information in the event of a disaster.