For the Trump administration, disappearing sea ice in the world's "high north" appears to be first and foremost an economic opportunity to exploit rather than a crisis to mitigate 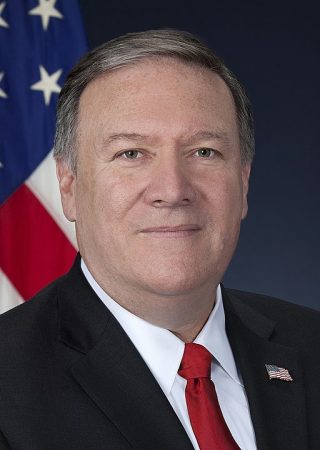 ROVANIEMI, Finland—The Arctic is melting, but don’t ask U.S. Secretary of State Mike Pompeo to talk about climate change. Nor even to agree on a text that mentions it.

For the Trump administration, disappearing sea ice in the world’s “high north” appears to be first and foremost an economic opportunity to exploit rather than a crisis to mitigate.

That position was made clear by Pompeo over two days of meetings in the northern Finnish Arctic city of Rovaniemi involving the foreign ministers of the eight members of the Arctic Council—Canada, Denmark, Finland, Iceland, Norway, Russia, Sweden and the United States.

“Steady reductions in sea ice are opening new naval passageways and new opportunities for trade, potentially slashing the time it takes for ships to travel between Asia and the West by 20 days,” he said in a speech Monday, which was met with polite but muted applause.

Finnish Foreign Minister Timo Soini, whose country is wrapping up its two-year chairmanship of the council, said Tuesday there was no joint declaration given the inability to get the U.S. to agree on a text that included language about climate change.

Instead, a brief joint statement reaffirmed a “commitment to maintain peace, stability and constructive co-operation in the Arctic.”

Soini told reporters that he didn’t want to “name and blame anybody” and called the outcome “good enough” for all parties. Finland’s chairmanship of the council had largely focused on climate change concerns.

A senior U.S. official, speaking to reporters on condition of anonymity, downplayed the failure to craft a declaration and defended Pompeo’s omission of “climate change” from remarks.

“Just because you don’t have a certain phrase in it, you can’t infer that the United States has taken a position that is anti-environment,” the official said.

Pompeo did acknowledge environmental concerns, and told the meeting Tuesday that “the Trump Administration shares your deep commitment to environmental stewardship.”

“The Arctic has always been a fragile ecosystem, and protecting it is indeed our shared responsibility,” Pompeo said.

Over the summit, Pompeo also defended President Donald Trump’s decision to pull the U.S. out of the Paris climate accord in 2017, a day after a U.N. biodiversity report warned that extinction loomed for over 1 million species of plants and animals.

“Collective goals, even when well-intentioned, are not always the answer,” Pompeo said. “They are rendered meaningless, even counterproductive, as soon as one nation fails to comply.”

Russian Foreign Minister Sergei Lavrov said his country is “open to the widest kind of co-operation in the Arctic” and that “there are no reasons for conflicts and for getting military methods involved in solving any issues arising here.”

Bill Erasmus, the chairman of the Arctic Athabaskan Council, a Canada-based group of indigenous people, expressed disappointment that a joint declaration had not been reached.

Official U.S. statements and documents prepared for the meeting did not refer to “climate change” and their scientific focus was limited to reductions in U.S. carbon emissions that predate the administration.

“I’m sure it was a good party,” Pompeo said of the negotiations in Paris. “I’m sure it felt good to sign the agreement. But at the end of the day, what matters to human health, what matters to the citizens of the world, is that we actually have an impact on improving health. And our technology, our innovation, the R&D we put in in the United States, that’s what will drive better climatic outcomes, that’s what will create cleaner air and safer drinking water, and that’s what I hope the whole world will focus on.”

Pompeo again declined the opportunity to mention “climate change” on Tuesday when he met with Canadian Foreign Minister Chrystia Freeland who pointedly referred to the phenomenon as she played down a dispute with the United States over the sovereignty of the Northwest Passage.

“We have a very close, very fruitful collaboration,” she said. “And actually, as we see the conditions of the Northwest Passage changing with our changing climate, I think that’s actually grounds for closer collaboration with the United States.”

Pompeo replied by saying the U.S. is more concerned about Russia and China in the Arctic than ownership of the Northwest Passage.

“The challenges in the Arctic aren’t between the United States and Canada, let me assure you,” he said. “There are others that threaten to use it in ways that are not consistent with the rule of law.”

“We can expect due to climate change more drastic changes in the next two decades than we have seen in the last 100 years,” he said.