In 2017, 12,000 square kilometres of forest burned in British Columbia 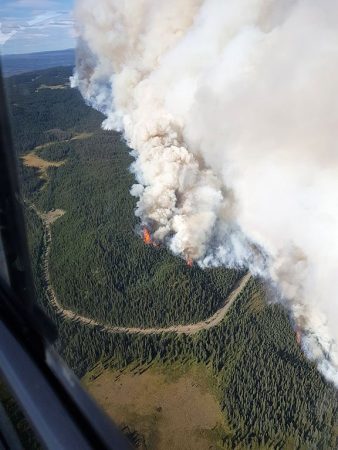 In a newly published paper, researchers from the Canadian Centre for Climate Modelling and Analysis say hot, dry weather directly caused by greenhouse gas emissions increased the province’s fire risk that year by up to four times. The same factors are likely to have increased the amount of land scorched by up to 11 times.

It’s an example of science’s growing ability to attribute the influence of climate change on specific events, said Megan Kirchmeier-Young, lead author of the paper published online by the journal Earth’s Future.

“People are always coming up with other ways we can be improving the way we do attribution. More and more scientists are focusing their research on this now.”

Kirchmeier-Young’s team reached its conclusion through a complicated statistical analysis.

They first built climate models based on two scenarios. One used current levels of greenhouse gases and one used levels from 1961 through 1970 before the strongest temperature increases began.

They took the measure of 2017’s wildfire risk from an index developed by Natural Resources Canada and calculated how likely it would be for that risk level to occur under both scenarios.

“By comparing these two likelihoods, we can make a statement about how the human climate factors changed the risk,” said Kirchmeier-Young.

The researchers concluded, with 90 per cent certainty, that the addition of greenhouse gas emissions at least doubled and may have quadrupled the chance wildfire risks would reach the extreme values the province experienced in 2017.

Neither forestry practices nor impacts such as the mountain pine beetle were taken into account, the paper acknowledges. But it says its findings are consistent with those of many other studies that find an increased wildfire risk from climate change.

The scientists also compared the average area burned each year between 1961 and 1970 with area scorched in 2017. The paper attributes about 90 per cent of the 12,000 square kilometres burned that year to the influence of climate change.

The fires forced about 65,000 people from their homes and destroyed 509 structures, including 229 homes. The province spent more than $522 million fighting the blazes.

Last summer was even worse. A new record was set when 13,000 square kilometres were devastated.

Because the 2018 fires were in different parts of the province, the team wasn’t able to tease out how climate change may have loaded the dice last year. But they do estimate about 85 per cent of the area burned can be blamed on climate change.

Scientists have long warned that more frequent and larger fires are the likely consequence of a warming climate as more heat and less precipitation lengthens the fire season and adds to the fuel load in forests.

Kirchmeier-Young said her findings are more evidence that climate change in Canada is much more than a distant threat.

“Our climate is changing as a result of human influence and Canadians are feeling the effects of that already.”