The trend reflects China's rise as a market and investor for an industry in which Beijing wants a leading role. China's leaders see electric vehicles as a way to clear smog-choked cities and as an engine for economic development 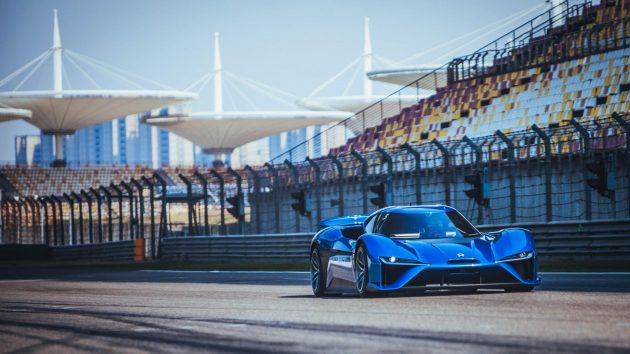 BEIJING—Want an insanely fast ride with zero emissions? Startup NIO has the car: An electric two-seater with muscular European lines and a top speed of 195 miles per hour (313 kilometres per hour).

The catch: The EP9 costs nearly $1.5 million. NIO, a Chinese-Western hybrid with bases in Shanghai, London and Silicon Valley, created it to showcase the company’s technology and had no sales plans. But it is taking orders for “bespoke vehicles” after hearing from buyers ready to pay the eye-popping price.

“We are actually pleasantly surprised how much interest we are getting,” said the CEO of NIO’s U.S. unit, Padmasree Warrior, a veteran of Cisco and Motorola.

NIO is part of a wave of fledgling automakers—all backed at least in part by Chinese investors—that are propelling the electric vehicle industry’s latest trend: ultra-high-performance cars.

Manufacturers including Detroit Electric, Qiantu Motor, Thunder Power and NEVS aim to compete with Europe, Detroit and Japan by offering top speeds over 240 kph and features including carbon fiber bodies and web-linked navigation and entertainment.

The ventures mix U.S. and European technology with Chinese money and manufacturing, reflecting this country’s rise as a market and investor for an industry where Beijing wants a leading role. Communist leaders see electric vehicles as a way to clear China’s smog-choked cities and as an engine for economic development.

“We really haven’t seen non-Chinese companies get into this super-technology market,” said Chris Robinson, who follows the industry for Lux Research.

Some brands are following the strategy of Tesla Inc., which debuted with an eye-catching roadster to establish a premium image before launching lower-priced models.

The instant torque and acceleration of electric cars make them natural performance vehicles.

Detroit Electric, a revival of a pioneering U.S. electric car brand founded in 1907, launched a sports car venture this year with a Chinese battery maker and the government of Yixing, west of Shanghai. For a base price of $135,000, the company promises zero to 100 kph in 3.7 seconds and a top speed of 250 kph.

The first seven of 100 cars ordered by European dealers have been delivered, according to its chairman and CEO, Albert Lam, a former Lotus chief executive. He said the company aims to release an SUV in 2018 and wants to have a four-vehicle lineup by 2020.

“Our target is to be the first Chinese-based vehicle company to sell worldwide,” said Lam.

Thunder Power, led by Hong Kong entrepreneur Wellen Sham, has a similarly multinational plan for a sport sedan due out in late 2018.

The company is building a factory in southern China and plans a second in Spain. Engineering work is being handled by Italy’s Dallara Automobili, which helped develop Bugatti’s Veyron, the fastest street-legal car with a top speed of 408.84 kph.

Thunder Power promises a top speed of 245 kph. The company says its competitive edge will be a battery that can go up to 650 kilometres on one charge, or almost double the 320 to 400 kilometres of current high-end electrics.

Beijing’s backing has helped to make China the biggest electric vehicle market at a time of uncertainty about the scale of support for the industry from Washington and European governments.

Sales in China of plug-in and hybrid vehicles in the first quarter of this year totalled 55,929, versus 44,876 for the United States.

The Cabinet hopes to have 100,000 public charging stations and 800,000 private stations operating by the end of this year. Regulators are pressing manufacturers to speed up development with a proposal to require that electrics account for at least 8 per cent of each brand’s production by next year.

To raise its profile, the electric vehicle industry launched its own racing circuit, dubbed Formula E, in 2014 with battery-powered Formula One-style cars and events in China, Europe, the United States and Mexico.

Still, no matter how appealing they are, there aren’t enough buyers to support so many high-performance brands, said Lux’s Robinson. He noted Ferrari or Lamborghini might sell only 15 of their fastest vehicles, which are treated as marketing tools and even at prices above $1 million fail to make a profit.

“Really, not all of them are going to make it,” said Robinson.

Despite that, the newcomers express confidence they can take market share from established rivals.

NIO’s Warrior points to the transition from cellphones to smartphones, in which industry leaders were displaced by upstarts.

“We are in the beginning of a race. We are all at the same starting position,” said Christopher Nicoll, marketing director for Thunder Power.

Detroit Electric’s Lam said his financial plan calls for each car to be sold at a profit by 2019.

“We are not from the internet world,” he said. “We know how important it is for a car company to make money.”

Other Chinese tech companies including internet search engine operator Baidu Inc. and LeEco, an online video service, are working on electric and self-driving vehicles. Most have research centres in Silicon Valley or Europe.

“China isn’t necessarily a technological leader. They are a production leader,” said Robinson. “A lot of the more advanced electric vehicle, power train and other technology research is going on in Europe and the United States.”

That helped Detroit Electric carry out its plans after other investors were uncertain, Lam said. He said the company picked Yixing after talking with four cities.

“We were invited to come to China,” said Lam.

The most prominent homegrown competitor is Qiantu Motor, led by a former executive of a state-owned automaker.

Qiantu says its K50, on sale next year, will deliver a top speed of 200 kph and go 300 kilometres on one charge.

NEVS is developing a sedan to be made in China based on technology acquired from defunct Swedish automaker Saab.

Its owners include National Modern Energy Holdings Ltd., a Chinese developer of renewable energy technology, the government of the eastern city of Tianjin and State Research Information Technology Co., owned by the Chinese Cabinet.

NIO developed the EP9 to promote its technology for self-driving vehicles. The first, a seven-seat SUV, is due to be released in China in 2018.

The company worried buyers saw electrics as a “little toy car.” It wants to “break that mould and say that an electric car can be a serious performance car,” said Warrior.

NIO says a self-driving version of the EP9 hit 256 kph in February on an Austin, Texas, test track.

“We made seven, thinking it was essentially for a collector,” said Warrior. “Now there is increased interest. People actually want to buy this car.”