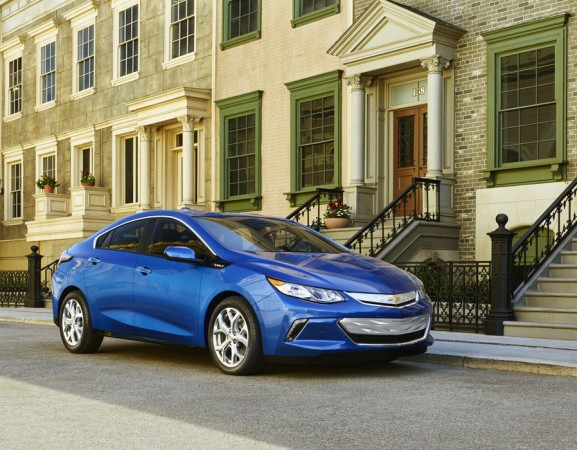 VANCOUVER—The 2016 Chevrolet Volt claimed top honours from the Automobile Journalists Association of Canada (AJAC) as the 2016 Canadian Green Car of the Year.

The announcements came at a press conference at the opening ceremonies of the Vancouver International Auto Show.

The Chevrolet Volt was chosen from among three finalists, winning over the 2016 Honda Civic and 2016 Hyundai Sonata Hybrid.

“Chevrolet is honoured to receive AJAC’s Green Car of the Year award, as it reinforces our commitment to being a leader in electrification,” said Laura Pacey, brand director at Chevrolet in Canada. “The second-generation Volt is a no-compromise electric car, delivering up to 80 kilometres of EV range, greater efficiency and stronger acceleration, making it the most innovative plug-in vehicle in the industry.”​​​

“We are very proud to accept the award for Canadian Green Utility Vehicle of the Year, which goes hand-in-hand with the Canadian Utility Vehicle of the Year award that AJAC presented to the CX-3 at the Toronto auto show,” said Kory Koreeda, President of Mazda Canada. “The CX-3 has proven itself to be an extremely capable vehicle, not only representing the style, vehicle dynamics and all-wheel drive that consumers are looking for, but also excellent fuel economy which allows consumers to have the best of both worlds – that is, capability in any weather without the fuel penalty often associated with owning an AWD utility vehicle.“

The Canadian Green Car of the Year entries are selected from eligible entries in the Canadian Car of the Year program. All vehicles are part of the “TestFest” program, in which more than 70 of Canada’s top auto journalists drive entries back-to-back for evaluation, including the Green vehicles. The Green entries are then re-evaluated against each other under a separate set of specific “green” criteria.

“A Green vehicle isn’t always just the electric car, or the smallest car,” says Kevin Corrigan, Chair of the Canadian Green Car Committee. “A fuel-efficient gasoline four-cylinder, or a six-cylinder luxury hybrid, can also be considered a Green vehicle in its segment of the market. Canadian consumers require environmentally-friendly transportation that meets their needs, whether it’s a small city runabout, or a large but fuel-efficient luxury product. Our intention with the Canadian Green Car of the Year program is not just to make consumers aware of environmental vehicles, but to know that we’ve tested them extensively and have chosen what we feel is the year’s best.”