From underwater balloons to redeveloping flooded mines, companies are re-imagining how to store energy 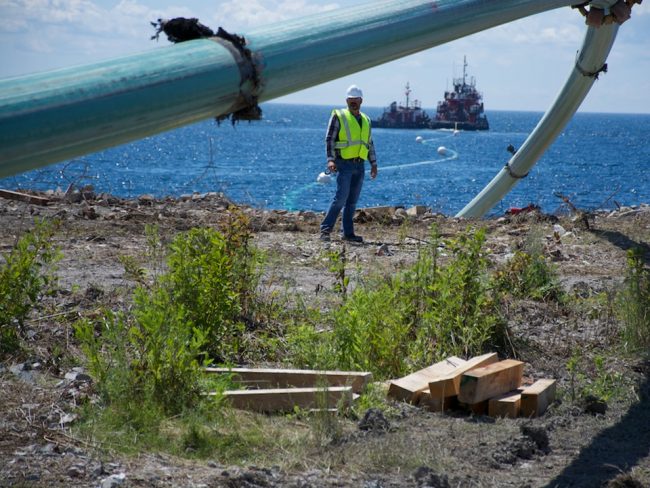 A pilot project at the bottom of Lake Ontario is currently testing the energy storage potential of underwater balloons. PHOTO: Hydrostor

CALGARY—The rise of renewable power has created a need for energy storage that companies are fulfilling with underwater balloons, multi-tonne flywheels and decades-old designs.

The need for energy storage comes from the temporary and sometimes unpredictable nature of renewable energy. The wind doesn’t always blow and the sun doesn’t always shine.

Power companies and utilities have been looking to compensate for that with what amount to giant batteries and smooth out delivery, storing energy in times of low demand and distributing it when demand is high.

Northland has been developing a 400-megawatt pumped storage project that takes the form of an old flooded mine, sitting on a plateau just outside of Marmora, Ont.

The roughly $900-million project in eastern Ontario pumps water up into the mine pit when there’s extra energy, and then lets it run out through a turbine when more energy is needed.

Similar to Northland’s Marmora project, Brazeau would be a pumped storage operation that would allow the company to pump water back up to the reservoirs of the existing hydro project.

TransAlta currently uses the project’s 355 megawatts of hydro to cover peak demands, while the expansion would add 600 to 900 megawatts of capacity and increased its flexibility.

In announcing it was restarting development of the estimated $1.8 billion to $2.5 billion project last fall, TransAlta chief executive Dawn Farrell said the project was slated to be the company’s next hydro project in the 1960s before coal power became economic in the province.

“So the world turns around in a big circle, and here we are back to this project,” said Farrell.

The circle is even tighter at Turning Point Generation, where Peter Bubik is trying to develop the Canyon Creek pumped storage project on the edge of an inactive coal mine lease in the Rocky Mountain foothills.

He says pumped storage is still the most proven way of storing large amounts of energy, with Canada’s only existing pumped storage operation near Niagara Falls now in operation for 60 years.

But new technology is opening other options.

Hydrostor is piloting a project with Toronto Hydro where air is compressed using power and pumped into underwater balloons sitting on the bottom of Lake Ontario.

When the power is needed, the water pressure helps push the air back out through turbines and the power is sent to the grid.

Hydrostor chief executive Curtis VanWalleghem said compressed air is growing as a way to store energy, but that it’s usually limited by the need for old mines or caverns in which to pump the gas.

“What you really need to do is fix the problem about where to store the air, and that’s what we focused on, and that’s proving to be the winning sauce,” VanWalleghem said.

The flywheel project is one of several that Ontario’s Independent Electricity System Operator has procured in recent years.

Chuck Farmer, director of stakeholder and public affairs, said that the IESO is waiting for Ontario’s long-term energy plan set to come out later this year before making any decisions on further energy storage projects, but that he sees energy storage as a long-term part of the grid.

“We see it at some point participating on an even footing with all the other things that provide services and energy, and we think it will get there in relatively short order,” said Farmer.