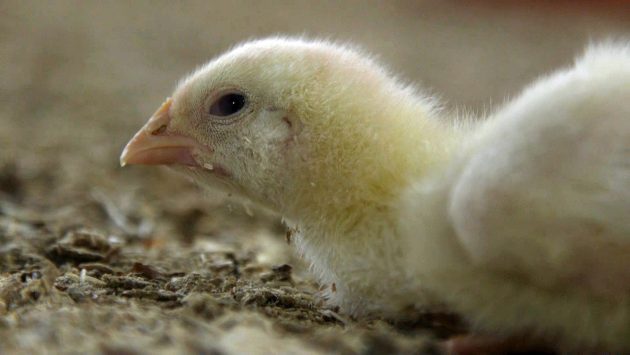 A chicken being raised for meat sits at an industrial farm at an undisclosed location. World Animal Protection is calling for better welfare standards for chickens to ensure that they have things like better ventilation, reduced stocking density, reduced growth rate and the ability to perform natural behaviours. (CNW Group/World Animal Protection)

TORONTO — COVID-19 shone a spotlight on animals, their role in our food system and the close links between animal welfare and human welfare.

The intensive, crowded conditions on most farms means many animals are denied space, natural light and the freedom to move around. This is true for the billions of chickens farmed globally. Genetically bred to grow as fast as possible, their legs and respiratory systems can’t support them.

Intensive farming methods also often rely on routine antibiotic use as a quick fix solution to keep stressed and sick animals alive. This over-use of antibiotics is fuelling the superbug crisis that kills over 700,000 people globally a year.

Industrial animal farming is also a major contributor to the climate crisis. It accounts for 70% of all agricultural land use and is responsible for 18% of greenhouse gases.

However, industrial farmed meat is mainly what fast-food restaurants serve.

The global charity, World Animal Protection is working to change that and has launched its third annual global assessment investigating the welfare of chickens raised for their meat and supplied to the world’s biggest fast-food chains including KFC, McDonald’s and Burger King.

The latest report called “The pecking order 2021” ranks these fast food restaurants globally on how they are performing on their commitment, ambition, and transparency on chicken welfare in their supply chains.

In addition to the global assessment, 14 local rankings have also been created. The brands assessed are Burger King, Domino’s, KFC, McDonald’s, Nando’s, Pizza Hut, Starbucks and Subway. They are ranked in tiers, with tier one being the highest and tier six the lowest.

Key findings from ‘The pecking order 2021’ for Canada include:

McDonald’s Canada also scored points for adopting a more humane slaughter method, called controlled-atmosphere stunning. This is a good start, but sourcing chickens from farms with low welfare conditions is unacceptable for a global brand that has the power to do more.

“It is disappointing that Nando’s, KFC and Pizza Hut scored so poorly in Canada given that these companies have signed up to the BCC in other markets globally,” said Kavanagh. “And while it’s great to see KFC Canada offer a plant-based option now, they are still denying millions of birds the chance to see natural light, to have more space to move around or to grow at a healthy rate. Chickens are intelligent, social animals and they deserve better lives.”

In Canada, World Animal Protection has been trying to engage with KFC Canada for about two years, but the company has not responded to requests for a meeting. The charity also has a petition out targeting KFC urging them to adopt the BCC and do better for chickens. So far, 9,500 Canadians have signed. World Animal Protection urges all consumers who may be concerned about chicken welfare to join forces and sign the petition as well.

Meanwhile in Europe, KFC is doing much better and is the only company to achieve Tier 1 (Leading) positions in any local rankings — four in total, which are the Netherlands, Sweden, Denmark and the UK.

“If other KFC franchises can improve the lives of chickens in their supply chain, why can’t KFC Canada do the same?” asks Kavanagh. She adds that animal welfare must be an integral part of a company’s sustainability policies.

In the meantime, World Animal Protection will continue to review “The pecking order” every year to monitor the progress of major fast-food brands.