OVINO opens its doors to the public on June 12 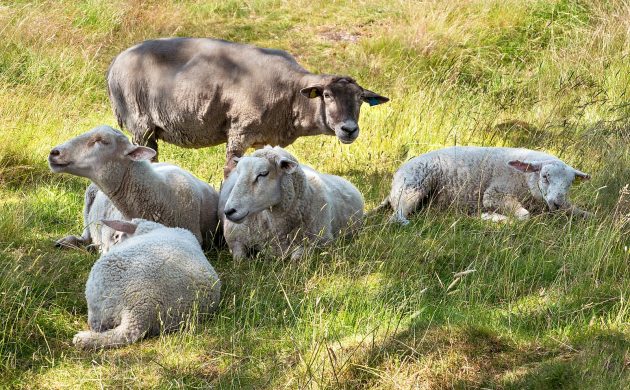 A flock of sheep (Ovis aries) lounging in the shade of a tree with the matriarch of the flock standing outside the shade. The flock was kept in the enclosed area of Röe Castle ruin to keep the vegetation in check. The standing matriarch is tagged in both ears meaning that she is selected for breeding and will not be slaughtered after her first year. The rest of the flock have tags in only one ear and will be slaughtered withing twelve months after their birth. Röe Castle ruin, Röe, Lysekil Municipality, Sweden. The image is stacked manually from two photos (handheld) for focus and light. PHOTO: W. Carter/ Wikimedia Commons

TORONTO — OVINO is a new venture that will house over 2000 sheep. OVINO employs feeding, bedding, and milking automation technologies. The sheep are fed and bedded by electrically powered TKS feeding and bedding machines that hang on the ceiling and travel along structural steel rails. The sheep are milked twice a day everyday in a rotary parlour that can milk up to 1000 sheep per hour. The sheep milk is then processed on-farm to produce fresh sheep milk and sheep yogourt.

“There is significant and growing demand for sheep milk from consumers that like its nutritional value, flavour, and digestibility.” said Jay Akras, Business Development Manager, OVINO, in a prepared statement.

Sheep milk packs almost double the nutritional value of cow milk in terms of higher protein, minerals, and vitamins. Unlike goat milk, sheep milk is similar to cow milk in flavour while being naturally creamier and sweeter. Sheep milk is also the perfect alternative for people who are lactose intolerant or who cannot drink cow milk. After all, nearly 70% of the global population is lactose intolerant.

The digestibility of sheep milk is due to several factors. Proteins in sheep milk are very different from those in cow’s milk, in both structure and composition. Sheep milk is naturally an A2-type milk, free from A1 beta-casein protein found in most cow milk which has been associated with digestive discomfort such as painful cramps and bloating. Sheep milk is also higher in short to medium chain fatty acids that are easier to digest due to more efficient metabolism. Due to all these factors, many people that are lactose intolerant or cannot drink cow milk have no issues enjoying sheep milk and sheep milk products.

OVINO will be offering farm tours as well as sheep milk and sheep yogourt taste sampling every weekend starting June 12 when the farm will open to the public for the first time. A grand opening will be held later this year once COVID restrictions are lifted.