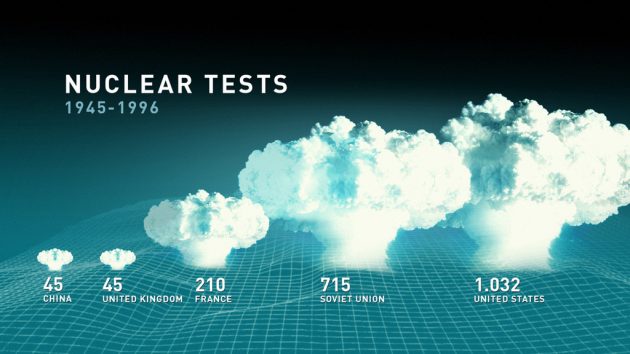 OTTAWA – Canadian officials have been quietly preparing for the fallout from an atmospheric nuclear-weapons test by North Korea, including the spread of radioactive debris across the ocean and the significant public concerns that would arise, internal government memos show.

In the event of a test, Health Canada’s radiation protection bureau would monitor contamination, while various federal agencies would manage any dangers to the public and ensure everyone is well-informed about developments.

Radiation levels would depend on the size and height of a detonation and weather patterns over the Pacific Ocean, according to model scenarios mapped out by the bureau.

“Historical experience in fallout monitoring indicates that contamination would be well below levels of public health concern,” says a presentation prepared for Health Canada’s deputy minister.

“Nonetheless, significant public and political concern can be anticipated.”

Officials expect to suddenly be juggling everything from testing the safety of the food supply to evaluating the hazards to travellers and Canadians living abroad.

The Canadian Press used the Access to Information Act to obtain a copy of the briefing materials. A few passages in the notes, drafted last December, were considered too sensitive to release under provisions of the access law concerning international relations and security.

Nuclear tests in North Korea have taken place underground, resulting in “extremely small” levels of radiation that pose no risk to Canadians, the presentation says. However, it adds the country’s threats last year to carry out an atmospheric test “highlights the need to be ready to respond” to consequences.

Canada is a signatory to the global Comprehensive Nuclear Test Ban Treaty, which prohibits nuclear explosions, and carries out various activities in support of the treaty including round-the-clock monitoring.

The radiation protection bureau operates a network of over 100 monitoring stations across Canada as well as laboratories that allow for prompt assessment of fallout from a nuclear accident or weapon through collection and analysis of air, rain and milk samples.

In the case of a nuclear event, the Federal Nuclear Emergency Plan kicks in, setting in motion efforts by the protection bureau and 18 other federal agencies, the notes say.

The bureau would provide “scenario analysis” on the spread of radioactivity to security and intelligence analysts in the Privy Council Office – the bureaucratic arm of Prime Minister’s Office. Teams at the PCO and Public Safety would manage the federal government’s overall communications response, with the chief public health officer serving as the lead spokesman on health issues.

The Public Health Agency of Canada, meanwhile, could activate a special operations centre, and the Canadian Food Inspection Agency would evaluate effects on food, feed and animals.

The protection bureau would be on standby to answer questions from Global Affairs Canada about any needed steps to protect diplomatic staff.

The various agencies worked together on a disaster in the not-so-distant past, forming Canada’s response to the 2011 Fukushima-Daiichi nuclear emergency following an earthquake and tsunami in Japan.