The brief but successful test flight marked a significant win for Harbour Air and partner magniX, which designed the electric motor, in the race to electrify commercial aviation fleets 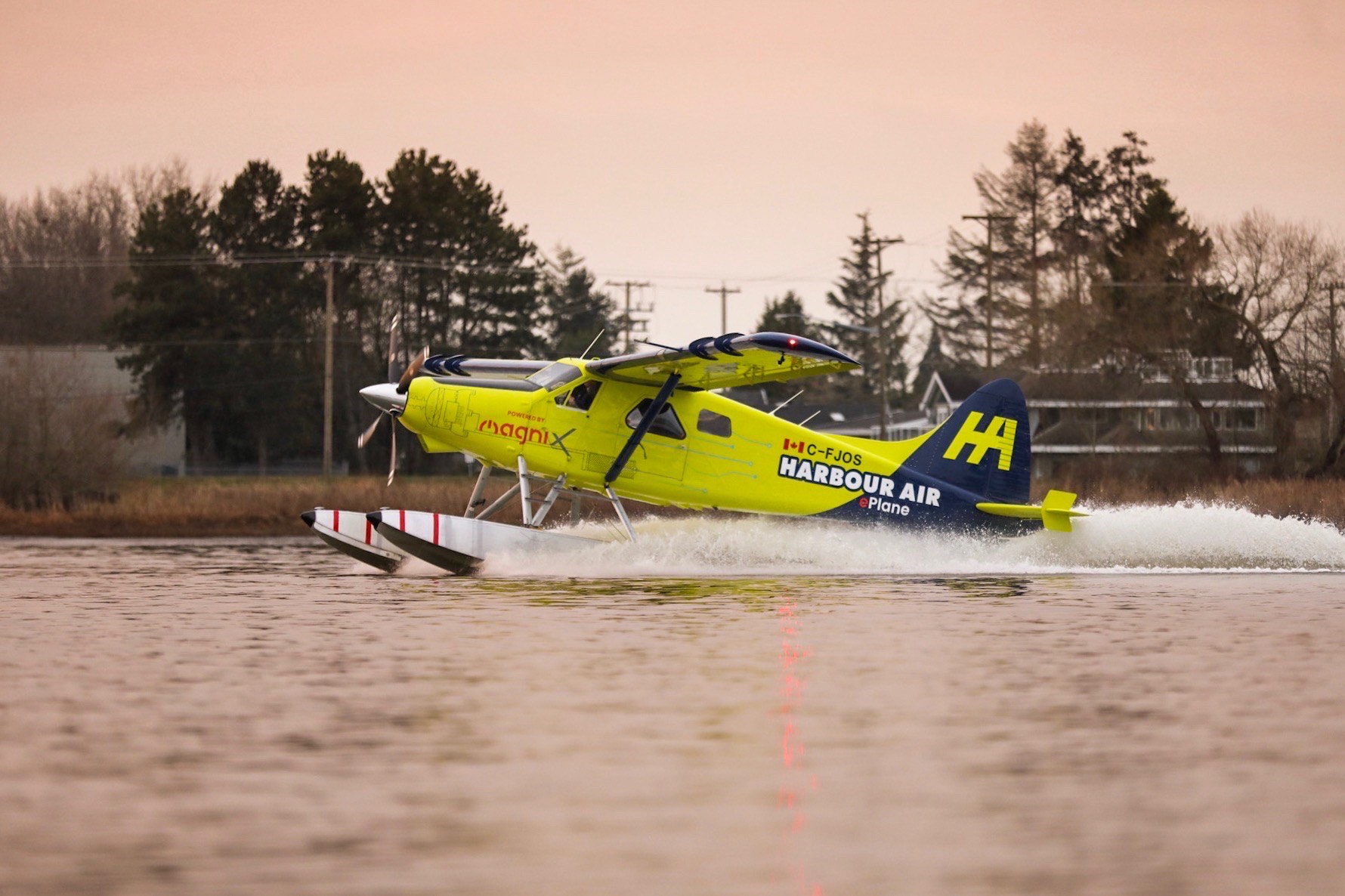 RICHMOND, B.C.—As Greg McDougall prepared to fly the world’s first all-electric commercial aircraft Tuesday morning, he said “nervous” wasn’t quite the word to describe how he was feeling.

The fact that the Harbour Air CEO would be the first person to take the modified de Havilland Beaver on a full test flight didn’t faze him, nor did knowledge of a charging glitch the night before.

McDougall had gone for a dinner break Monday evening while a crew of designers and engineers stared at their computers with furrowed brows, and he returned later to find them smiling and laughing, crisis averted.

With the sun hanging low over the Fraser River in Richmond, B.C., McDougall shifted the throttle into gear and took off. After landing, he said it felt just like flying any other plane, only with more kick.

“For me, that flight was just like flying a Beaver but it was a Beaver on electric steroids,” he said, adding he had to throttle back in order to delay the takeoff to be in line with about a dozen cameras.

“It wanted to fly. With the tail wind it was going to leap off the water.”

The brief but successful test flight marked a significant win for Harbour Air and partner magniX, which designed the electric motor, in the race to electrify commercial aviation fleets.

Related: B.C. seaplane company’s plan for electric fleet is set for take off

Dozens of companies are working on electric planes, including Boeing and Airbus. Israeli company Eviation unveiled a nine-seat, all-electric plane named “Alice” at the Paris Air Show in June, which also happens to be a magniX project.

Roei Ganzarski, CEO of Seattle-based engineering firm magniX, described the test flight as the beginning of a revolution in aviation.

In 1903, the Wright brothers made history with the first successful flight and in 1939, the Heinkel jet launched the jet age, he said.

“Since 1939, we’ve pretty much stayed stable. Today that team made history,” Ganzarski said, gesturing toward the design team.

Harbour Air announced in March that it had partnered with magniX with the goal of becoming the world’s first all-electric airline.

The 62-year-old Beaver was outfitted with a 750-horsepower electric motor, which gives it capacity to fly about 160 kilometres before needing a recharge.

Weight, altitude and storage remain the biggest barriers to flying electric. A mid-sized passenger plane weighs 100 times as much as a mid-sized car and the battery technology hasn’t quite adjusted to the aviation market.

Fuel also remains about 40 to 50 times more power dense than batteries, Ganzarski said. But the team expects innovation in the battery industry to continue in the same way for aviation as it has for electric cars. The key will be developing batteries that are more compact at the same time that they are more powerful.

The test flight used lithium-ion batteries because they are the most “tried and true” but there are already others on the market that are more powerful, McDougall said.

“The evolution of lithium batteries is constant and there are literally billions of dollars being poured into that technology as we speak,” he said.

In the meantime, Ganzarski said the market is there for electric planes to take off around the world.

Exactly when the electric aircraft will be approved for commercial flight is unclear as Transport Canada will be entering new territory.

But McDougall said the goal is to get passengers on Harbour Air electric flights within two years.

The operating costs are between 50 and 80% lower than combustion engines and ultimately, that will mean lower ticket prices for passengers, he said.

Harbour Air covers 12 routes and operates about 30,000 flights a year between Vancouver, Victoria, Seattle and other locations.