A review of the megaproject found cost overruns and delays are likely. It also said alternative energy sources, such as wind and geothermal, offer equal or lower costs, heaping further uncertainty on the hydro project 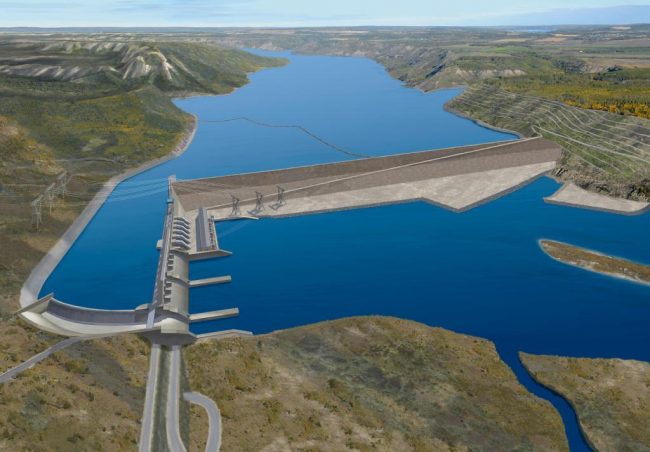 Rendering of B.C’s Site C dam. Construction crews have been working on the project for more than two years. PHOTO: BC Hydro

VICTORIA—The British Columbia government will decide the future of the Site C hydroelectric dam by the end of the year after an independent review concluded the $8.3 billion megaproject is over budget and behind schedule.

The British Columbia Utilities Commission says the dam is not likely to be completed by a 2024 deadline and could end up costing 20 to 50 per cent more than budgeted, increasing completion costs to above $10 billion.

Energy Minister Michelle Mungall said cabinet now must decide by the end of this year whether to kill the project or continue construction, which started more than two years ago.

“We will be going forward, reviewing this in detail,” she said. “We will be consulting with First Nations and we will be delivering our decision to British Columbians by the end of this year. This is a very serious decision. It’s going to be impacting the future of our province.”

Mungall said the project’s costs will drive the government’s decision and it is aware the jobs of more than 2,000 people are at stake.

“We appreciate that this is tough on everyone,” said Mungall, who blamed local economic tensions on the Liberals for not ordering a review of Site C by the utilities commission.

The commission was asked to confirm whether Crown-owned BC Hydro is on target to complete Site C on budget and by 2024. It was also asked to provide advice on three possible outcomes: proceeding with the project, suspending construction until 2024 or terminating it.

The commission concluded suspending and restarting the project in 2024 is the least attractive option, adding at least $3.6 billion to its final costs.

Mungall agreed temporarily suspending construction is not a viable option, which leaves the government to decide between going ahead or stopping construction.

The review doesn’t make a recommendation on whether the province should proceed or cancel the dam, but it said terminating the project would cost $1.8 billion while completing it could cost more than $10 billion.

The commission said there are viable alternative energy sources including wind, geothermal and industrial curtailment that could provide similar benefits to Site C with an equal or lower cost.

Commission chairman David Morton said BC Hydro produced a low-risk scenario before the start of construction that estimated Site C would cost more than $10 billion, but chose to focus on its higher risk total cost projection of $8.3 billion, plus contingency costs.

He said the commission has provided the government with a detailed analysis of the economics of Site C.

“There’s a lot of cost to ratepayer and economic information in this report and we’re hopeful it’s enough information of that nature,” said Morton.

Liberal Mike Bernier, who represents northeast communities near the dam site, said thousands of jobs are at stake and the government is considering writing off the estimated $4 billion already spent on Site C.

“Site C is one of these projects that is going to make sure for generations to come we have cheap, reliable, clean, firm power,” he said.

But environmental groups and activists said the review confirms there are cost-effective and environmentally friendly alternatives to building a dam that will flood agricultural land and create an 83-kilometre long reservoir.

“Their analysis is pretty damning,” said Harry Swain, the former chairman of a federal-provincial joint review panel that issued a report in 2014 that the province used to proceed with Site C.

“The summary would be, if they were allowed to make a recommendation: ‘Gosh, don’t do this.’ ”

He said the utilities commission review should be viewed as a statement in support of the alternative energy industry.

Hydro’s 866-page submission to the commission said completing the dam as planned would still be best for ratepayers and terminating the project would cost $7.3 billion on a present-value basis. The submission said demand for electricity is growing and without the dam, the province would hit an energy shortfall by 2031.

Site C would be the third dam on the Peace River near Fort St. John.