B.C. man using Zamboni as snowplow lands in a bit of hot water

As a rare heavy snowfall blanketed Vancouver Island, one man mounted his rugged ice resurfacer and took to the streets 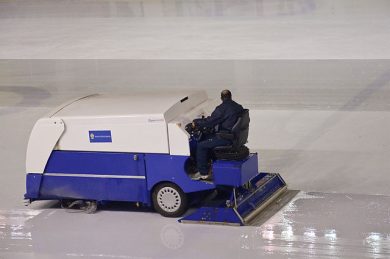 Normally used to resurface ice at arenas, one B.C. man found another use for his second-hand Zamboni. PHOTO: Myrabella, via Wikimedia Commons

CENTRAL SAANICH, B.C.—One man has found a uniquely Canadian way to respond to the unusually large amounts of snow that have fallen on parts of British Columbia by taking his Zamboni out to clear roads in one Vancouver Island community.

Cpl. Dan Cottingham of the Central Saanich police says officers were called at about 7:30 p.m. Feb. 6 after a local farmer took his Zamboni out on the streets of the district, just outside Victoria.

“I’m not sure exactly what he was doing in relation to clearing snow, but he might have just been plowing it out of the way,” said Cottingham.

The man, Marko Kardum, later said he was just trying to be a good nephew, climbing onto his Zamboni after the snowstorm hit and heading down the road to his aunt’s nearby farm to clear the road.

Kardum said he bought the second-hand machine to move horse manure, but found it’s quite good for removing snow, too.

“It worked really well, actually. I was surprised,” he said.

The Good Samaritan said he was clearing the last patch when a police officer approached, saying they had received a call about someone trying to create a skating rink on the road.

The officer, he said, was entertained by the sight of the machine normally used on hockey rinks and asked him to go home because the vehicle doesn’t have the insurance required to be operated on public roads.

“He was thanked, but asked to go back to his property,” Cottingham said.

Victoria and Vancouver are among cities in the province that have had unusually large snowfalls since the weekend, snarling traffic and causing delays on public transit.

Abbotsford has received nearly 50 centimetres of snow since the beginning of the month.