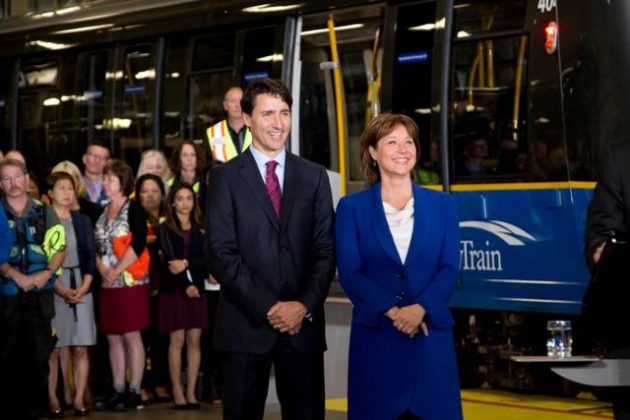 RICHMOND, B.C.—The British Columbia government is maintaining a freeze on its carbon tax and refusing to budge on a timeline to reduce greenhouse gas emissions in a new climate plan that environmental groups describe as a missed opportunity.

Premier Christy Clark said that the government needs to keep the province economically competitive to protect jobs in the battle against climate change as she highlighted 21 measures the province is taking to cut emissions.

“A climate plan is not just about carbon pricing,” she told a news conference. “As the World Bank noted, carbon pricing is just one instrument in a portfolio of approaches to fight climate change. And we cannot get where we need to be in fighting climate change in British Columbia with a carbon tax alone.”

The Climate Leadership Plan says the steps the province is taking will help B.C. meet its target to reduce emissions by 80 per cent of 2007 levels by 2050.

The federal government, along with other provinces, have set new goals following the Paris Agreement last December to reduce emissions by 30 per cent below 2005 levels by 2030.

By sticking to its 2050 date, British Columbia has also decided against moving up the target to 2030, as an advisory group known as the Climate Leadership Team had recommended.

The plan immediately drew fierce criticism from experts and environmentalists, some of whom were on the government-appointed team.

The group of experts, First Nations, and business leaders who were appointed by the government to the team made 32 recommendations last fall, including raising the $30-per-tonne carbon tax by $10 annually starting in 2018.

The carbon tax has been in place since 2008 but includes some industry exemptions. In 2012, the tax reached $30 per tonne of carbon emissions—about seven cents per litre at the gas pump—but it has not been increased since then.

Green party Leader Andrew Weaver, a climate scientist who served on a similar team under former premier Gordon Campbell when he brought in the tax, said the legacy of the previous Liberal government had been destroyed.

Weaver said the experts on the new team who made the latest recommendations were “used” by Clark’s Liberals.

“These were people who actually thought this government cared about the process they set up to deliver a recommendation. They didn’t care. It’s a game.”

The government said it will re-evaluate the carbon tax once other jurisdictions introduce similar levies.

The Business Council of British Columbia said it remains concerned about the competitiveness of its members, particularly exporters.

“As a small trading economy, B.C. is competing with jurisdictions that have not taken similar climate management steps, putting a number of our energy-intensive, trade-exposed industries at a disadvantage in the global market,” it said in a statement.

It said some businesses are paying up to $50 million a year in carbon tax.

“These businesses must compete with companies based outside of the province that sell goods into B.C. and other global markets while paying a much lower price on carbon, or no carbon levy at all. This makes these businesses less competitive.”

Clean Energy Canada director Merran Smith, who sat on the Climate Leadership Team, called the government’s new plan a set of “vague promises” that aren’t backed up by regulations or dollars.

Of the team’s 32 recommendations, none has been adopted fully, she said.

“This isn’t a climate plan about climate action, it’s about procrastination,” she said. “With this plan, the best-case scenario for British Columbia is that carbon pollution will be about the same in 2030 as it is today.”

Tim Pearson, communications director for the Sierra Club BC, said there was no reason for British Columbia to wait for other provinces to bring in carbon taxes.

“Right now, its economic performance is clearly not being hampered by a $30 carbon tax. It is competing just fine against other provinces that have no carbon tax.”

With files from Laura Kane