Victoria, B.C., is among the cities rallying for oil companies to chip in to cover growing bills in proportion to their emissions 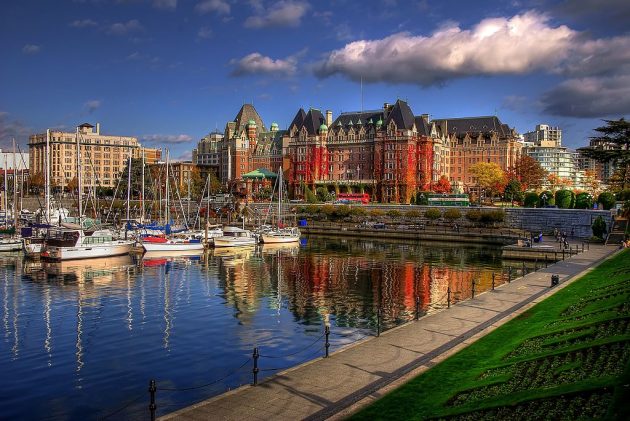 Staff and contractors in Victoria have been crunching the numbers on climate change costs for the coastal city and it’s not looking good, the mayor says.

Lisa Helps says based on a report commissioned by the regional government in 2015, storm surges combined with a one-metre rise in sea level – which is projected by the year 2100 – could result in business disruption losses of $415,557 per day.

Victoria was one of the first municipalities in British Columbia to pen a letter to oil and gas companies last year asking them to chip in to cover growing bills in proportion to their emissions.

It is joining local governments around the world in seeking some relief.

“We’re actively working through our climate leadership plan to reduce our reliance on fossil fuels, but in the interim there are real costs to taxpayers,” Helps said in an interview.

“It’s pretty fair to say ‘You caused this, you need to help us mitigate the cost,’ even as we all – energy companies and cities – work toward a renewable energy future.”

West Coast Environmental Law, which has driven the campaign in B.C., says 16 local councils have voted to write letters to fossil fuel companies. The most recent was West Vancouver, which voted last week.

It’s not about handing the entire bill to fossil fuel producers, but seeking a reasonable contribution relative to a company’s pollution, he said.

“No one is saying the individual consumer bears no responsibility, it’s a question of what the relative responsibility is,” he said.

The Canadian Association of Petroleum Producers declined comment, saying that since the letters are sent directly to companies, it considers the issue “company specific.” Shell and Exxon Mobil, two of the largest oil companies in the world, did not respond to requests for comment.

The campaign has largely flown under the radar until recently when the resort town of Whistler in B.C. drew the ire of Alberta for sending one of the letters to Calgary-based oilsands giant Canadian Natural Resources Ltd.

“The people of Whistler need to tell the truth: that they are using Alberta gas for their cars, for their petrochemical products, and they’re using our oil and it’s time to smarten up,” he told the rally.

Governments in other parts of the world are trying different tactics.

Several cities in the United States, including New York and San Francisco, have tried unsuccessfully to sue major oil companies over climate change.

In the Philippines, the Commission on Human Rights has an ongoing investigation into a complaint filed against 47 coal, oil, gas and cement companies.

Greenpeace says it’s the world’s first human rights investigation into corporate responsibility for climate change and was launched in response to complaints from typhoon survivors, advocates and community groups.

While there’s no monetary element to the investigation, Greenpeace said it could set a precedent for other legal cases relating to climate change liability.

In Ontario, the legislature has twice debated a private member’s bill intended to clarify the rules around suing fossil fuel companies. The bill was killed by the Progressive Conservative government under Premier Doug Ford.

Greenpeace Canada said it’s working on a tool kit for local governments considering launching a legal challenge to fossil fuel companies similar to those in the United States.

“We’ll be encouraging cities across the country, and I’ll personally ask the City of Toronto, to launch this kind of a case,” said Keith Stewart, senior energy strategist at Greenpeace Canada.

Stewart pointed to a city staff report that found between 2000 and 2012, Toronto experienced three one-in-100-year rain storms and it said the city would continue to experience extreme weather events.

“This wave of climate lawsuits, which have just picked up speed in the last couple of years, is not going to go away,” Stewart said.

Whether the letter writing campaign will be effective beyond raising awareness has yet to be seen.

Since Victoria sent 19 letters to the largest fossil fuel companies in the world, none of which Helps said were Canadian, it has received only one response.

Shell Canada responded on behalf of Royal Dutch Shell in a letter that did not commit to any payment but highlighted the companies support for emissions goals as outlined in the Paris Agreement and “billions of dollars” it has invested in low carbon and renewable energies.

It also highlighted its Quest project, launched in Edmonton in 2015, as an example, saying it reduces carbon dioxide emissions from oil sands operations by more than one million tonnes per year.

“These are a few examples of the actions we are taking today, recognizing that the global energy transition will span decades, moving at different paces and producing different outcomes in different countries depending on local factors,” says the letter signed by president Michael Crothers.

“We welcome efforts toward constructive, collaborative action as we collectively attempt to address this complex global challenge.”