B.C. has requested consultations under the Canadian free trade agreement's dispute settlement process in latest salvo between the two provinces 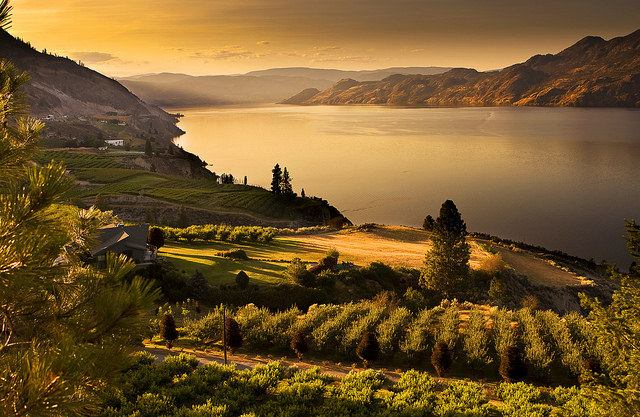 The Okanagan wine region has become an important economic driver for the Western Canadian province. PHOTO: Province of B.C./Flickr

VANCOUVER—British Columbia has turned up the heat in a simmering trade dispute by launching a formal challenge against Alberta’s ban on its wines.

The B.C. government said Feb. 19 it notified Alberta that it is formally requesting consultations under the Canadian free trade agreement’s dispute settlement process.

The latest salvo is part of an increasingly bitter political tussle over the expansion of bitumen shipments through the Trans Mountain pipeline and the potential environmental consequences.

“I think what is important is standing up for B.C. wineries, B.C. businesses and B.C. jobs,” he said during a news conference.

The ban has implications across the country, Ralston added.

“The Canadian Free Trade Agreement is an agreement signed by all provinces and all territories, so it has national scope and it’s our view that this dispute engages questions that should be considered by every jurisdiction in the federation.”

Initial discussions will take place between officials from both governments, Ralston said, and if they can’t resolve the dispute within 120 days, the issue will go to a tribunal.

Under the rules of the trade partnership agreement, a dispute can be referred to binding arbitration after all other means to resolve the problem have been taken.

Two members of a three-member panel are chosen by each province and they have to agree on a third member to act as a chairperson.

The full costs of the action can be charged to the losing province and if the province doesn’t fix the problem within the time set out by the panel, it can be fined up to $5 million.

He said the ban is a reasonable response to an unreasonable attack on the Canadian economy.

“We defend our actions vigorously on behalf of working people.”

A group representing 276 B.C. wineries said it is grateful for the provincial government’s efforts to resolve the “unfair” ban, but concerned about the dispute dragging on.

“Given the lengthy process that a challenge through the Canadian Free Trade Agreement’s dispute settlement process will take, we continue to ask the Alberta Gaming and Liquor Commission to lift the unfair ban and allow the free trade of B.C. wines into Alberta,” Miles Prodan, president of the B.C. Wine Institute, said in a statement.

The dispute began after B.C. Premier John Horgan’s government announced a proposal to limit shipments of diluted bitumen while it studies the environmental impact of a potential spill.

Alberta believes the actions will effectively kill the pipeline expansion, which the province deems critical to getting a better price for its oil.

Alberta Premier Rachel Notley has called the move “unconstitutional,” and said the federal government—not B.C.—has the final say on what is transported through interprovincial pipelines.

A spokesman for Natural Resources Minister Jim Carr said Monday that the pipeline falls under federal jurisdiction and they “will not allow any province to infringe on the federal government’s jurisdiction over the national interest.”

Notley has also ended talks on buying electricity from B.C., while B.C. announced over the weekend that it was appealing a National Energy Board decision that allowed pipeline builder Kinder Morgan Canada to bypass local regulations in the construction of its pipeline.

David Moscrop, a political scientist at Simon Fraser University in Burnaby, B.C., said provinces regularly have disagreements, but it’s rare for an issue to escalate into a trade war.

He expects the dispute to continue because there’s little incentive for anyone to compromise.

“They’re all going to dig in because this isn’t just seen as an issue, this is seen as a fundamental issue,” he said.

Ultimately, British Columbians and Albertans are the ones who will suffer, Moscrop added.

“Everybody loses in a trade war. You just don’t win, especially in an interprovincial trade war because we’re all on the same team, more or less, at the end of the day,” he said.

—With files from Dirk Meissner in Victoria