‘An artificial reef’: Marine life grows beneath the waves at offshore wind farm

Industry advocates say the U.S's first offshore wind farm shows the potential for larger-scale projects, but not all fishermen are convinced 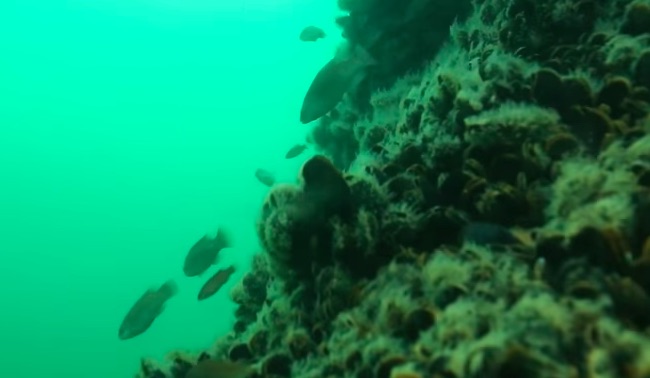 The turbine support structures beneath the waves are acting as an artificial reef for marine life. PHOTO: AWEA/YouTube

The American Wind Energy Association, an industry trade group, says the roughly two-minute clip it posted on YouTube this week shows the potential for the nation’s fishing industry as larger projects are envisioned up and down the East Coast in the coming years.

“The turbine foundations are now acting as an artificial reef,” said Nancy Sopko, the wind energy association’s director of offshore wind and federal legislative affairs. “This is a success story that can be replicated all along our coastlines.”

But the video does little to temper the concerns of commercial fishermen, which include navigating dense forests of turbines to get to their historic fishing grounds, says Jim Kendall, a former scallop fisherman in New Bedford, Massachusetts.

“This is nice and fun to see, but it doesn’t tip the conversation,” Seth Rolbein, of the Cape Cod Commercial Fishermen’s Alliance in Chatham, Massachusetts, said of the video.

Offshore wind developers from New England to the Carolinas are racing to build the nation’s first large scale wind farm. Many of the projects call for hundreds of turbines to be built miles away from shore, sometimes within or along the path to popular fishing areas.

The brief underwater footage is juxtaposed with longer testimonials from local recreational fishermen and charter boat owners who say the wind farm has been a boon for them since Deepwater Wind opened it more than a year ago.

But commercial fishermen are notably absent from the video and it doesn’t acknowledge the experiences of Rhode Island fishermen who have had their trawling gear damaged by buried power cables, notes Daniel Farnham, co-owner of Silver Dollar Seafood, a seafood wholesaler in Montauk, New York. “Unfortunately this does not tell the whole story,” he said.

The “artificial reef” effect is also only beneficial to certain species—and not necessarily the ones that U.S. commercial fishermen depend on for their livelihood, added Meghan Lapp, of Seafreeze Ltd., a seafood harvester and dealer in North Kingstown, Rhode Island.

“Squid, flounders, scallops and other species need sandy bottom without structure to thrive,” she said. “So, the turbine bases not only destroy their habitat, but also introduce an entirely different ecosystem that attract species that didn’t aggregate in the area before.”

Deepwater Wind is in the final year of conducting two, multi-year studies comparing marine life activity prior to the wind farm’s construction to what it looks like currently.

“We have not seen a statistical increase or decrease,” she said. “We’re hearing anecdotally that there appears to be more fish, but we’ll have to wait for the results of the science.”

Watch the short video breaking down the underwater benefits of the turbines: