Opposition Wildrose critic, meanwhile, argued the science "isn't settled" on whether humans are responsible for majority of climate change and that most Albertans continue to oppose the tax 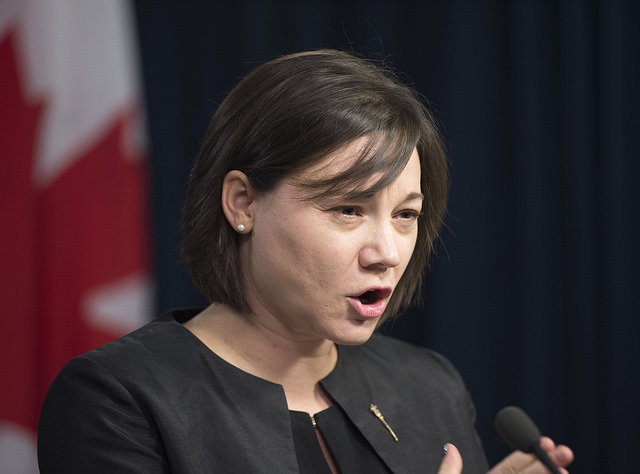 Shannon Phillips addressed what she characterized as “misinformation” about the levy a day after it took effect. PHOTO: Chris Schwarz/Government of Alberta, via Flickr

EDMONTON—Alberta Environment Minister Shannon Phillips said the province was “still standing” a day after its carbon tax took effect, and Albertans who opposed the levy could start seeing rebate cheques within days.

But Opposition Wildrose critic Don MacIntyre said the majority of Albertans continue to oppose the tax, and that the science isn’t settled on whether humans are responsible for the majority of climate change.

The tax officially began Sunday, adding 4.5 cents per litre of gasoline at the pumps as well as hiking costs for home heating.

Phillips held a news conference Jan. 2 where she addressed what she felt was “misinformation” about the levy, a day after deputy premier Sarah Hoffman held a similar media availability in the legislature building.

“There is no doubt this is a large change for Alberta. It’s a large change with large rewards, and it is completely fair for ordinary Albertans have questions,” Phillips said.

Like Hoffman a day earlier, Phillips stressed the link between the NDP government’s new tax on carbon and the Prime Minister Justin Trudeau’s approval of the Trans Mountain pipeline expansion in November.

MacIntyre, however, said pipelines were still built before there were carbon taxes, and that pipeline approvals should be based on scientific merit by the National Energy Board rather than politics.

“It is a rather typical move on the part of a socialist government to tax its businesses into insolvency and its people into poverty and then offer us a crumb or two of our own money and expect us to be grateful. Well, we’re not,” MacIntyre said.

Several large protests against the tax have been held at the legislature in the last few months, with critics demanding a referendum.

Phillips said the costs of the tax to Albertans will be nominal, despite opposition claims that families will pay thousands of dollars. Cheques to offset the costs, based on income from tax returns from 2015, start being sent this week, she said, and will be re-evaluated after Albertans file their 2016 returns.

She said details for rebates for energy efficiency upgrades will be announced before March.

MacIntyre argued Albertans were involved in green, energy-efficiency projects long before the NDP came to power in 2015.

But when MacIntyre was challenged by a reporter whether there was a discrepancy between his call for a science-based approval process for pipelines and his view that it’s wrong to claim climate change is primarily man-made, he the science “isn’t settled.”

In 2007, a report from the Intergovernmental Panel on Climate Change—a group of hundreds of the world’s leading scientists—said global warming was human-made and blamed it largely on the burning of oil and other fossil fuels.

“You can’t say that any more,” MacIntyre said Monday. “The science isn’t settled.”