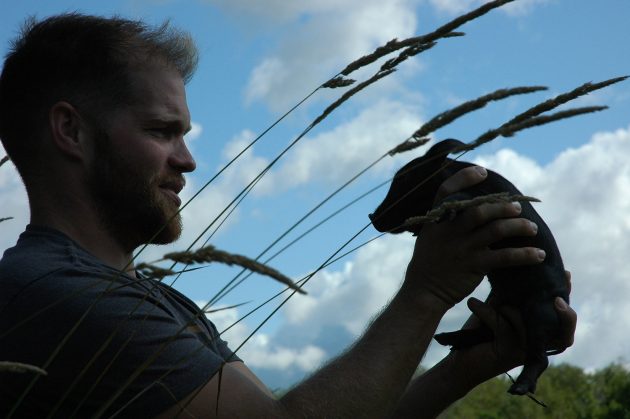 Farmer Jeff Linton of Linton Pasture Pork, a high welfare farm in Ontario inspects one of his piglets. He is against all forms of industrial farming practices, including overcrowding animals which can cause stress and sickness leading to routine antibiotic use for disease prevention. World Animal Protection applauds farmers like Jeff who put the welfare of the animals first.
Credit: Nina Devries/World Animal Protection
Date: August 2019. (CNW Group/World Animal Protection)

TORONTO — Public waterways next to industrial farms in Manitoba contain antibiotic resistance genes (ARGs) that are dangerous to public health says a report from the global charity World Animal Protection. The report is the first multi-country investigation of its kind titled, ‘Silent superbug killers in a river near you’ and along with Canada, included testing in Spain, the US and Thailand.

ARGs should be of concern because they are the building blocks for “superbugs” (bacteria that have developed resistance to one or more antibiotics). This means those antibiotics will be less or ineffective in treating infections in humans. Some antibiotics are already ineffective in some parts of the world. If action is not taken, in future, routine procedures like caesarean sections or cancer treatments could become dangerous worldwide.

The report found that industrial farms could be discharging superbugs into the wider environment as a result of pig waste being spread on fields and leeching into groundwater and public waterways.

Once in the environment, superbugs can reach humans in multiple ways. This includes through recreation such as water sports, eating fish from contaminated water and eating of crops contaminated with surface water.

In Manitoba, the presence of ARGs was evaluated from samples collected in November 2020 from publicly accessible spaces upstream and downstream of eight industrial pig farms. The investigation found ARGs resistant to antibiotics included cephalosporins and fluoroquinolones, which are of most concern to the World Health Organization (WHO). These antibiotics are the last line of defence for common infections like urinary tract infections or to keep patients alive with life threatening conditions like respiratory infections, when other antibiotics fail.

The routine overuse of antibiotics in animal agriculture is recognized by the WHO and the United Nations as a significant contributor to the emergence of superbugs. Up to 10 million people are expected to die from superbugs each year by 2050.

On industrial farms, mother pigs are often stuck in cages their entire lives, their piglets suffer from painful procedures such as tail cutting and the animals are forced to spend their lives in overcrowded, unsanitary conditions on concrete floors, with no enrichment. This can cause stress and sickness, so routine antibiotics are used on the animals for disease prevention.

“Industrial animal agriculture is taking risks with people’s lives by routinely using antibiotics, which is fueling the rise in dangerous superbugs,” Lynn Kavanagh, Farming Campaign Manager, at World Animal Protection, said in a statement. “Keeping animals in conditions where they’re healthier, is the only way to stop the overuse of antibiotics on farms. We need to stop using antibiotics across groups of animals to prevent sickness.”

From January 2022, it will be illegal in the European Union to administer antibiotics across groups of farm animals to prevent disease.