Competition for offshore wind ramps up in northeast U.S.

A new Massachusetts law requires the state generate at least 1,600 megawatts of power from offshore wind turbines by 2027 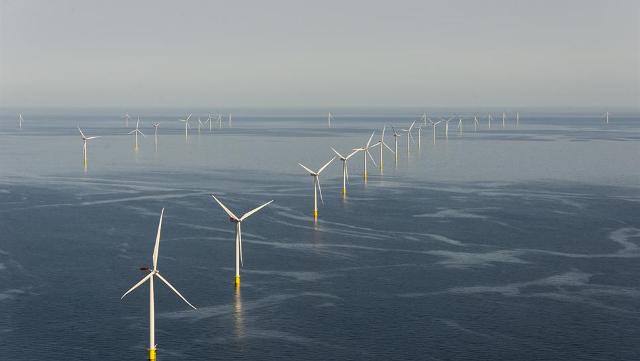 Denmark’s Dong Energy, which has built hundreds of turbines across Europe is one of the companies looking to make a splash off the U.S. coast. PHOTO: Dong Energy

BOSTON—Massachusetts’ bid to become the nation’s leader in offshore wind power is ramping up.

The state’s electric utilities—National Grid, Eversource and Unitil—are slated to release by June 30 their requirements for projects seeking to develop the state’s first ocean-based wind farm.

That sets in motion an ambitious effort to put Massachusetts ahead of states like New York, New Jersey and Maryland also seeking to establish their presence in the nascent U.S. industry. Here’s a primer on where things stand:

The law calls for generating at least 1,600 megawatts of power, roughly enough electricity to power 750,000 homes annually, from offshore wind by 2027.

To accomplish this, the utilities are required to secure long-term contracts with wind farm developers in at least two phases: a bid request this June and another in 2019.

The law also calls for generating up to 1,200 additional megawatts from other clean energy sources, including hydropower, onshore wind power and solar power by 2027.

Those three have already taken the key step of securing federal leases to develop offshore wind farms miles of the coasts of Martha’s Vineyard and Nantucket, where the state is focusing its offshore wind efforts.

Each firm comes with its industry bonafides.

DONG Energy has installed hundreds of turbines in waters off Europe and has partnered with Eversource on its Massachusetts venture.

The utilities—in concert with state agencies—have been developing their bid requirements for months.

The most recent draft calls for proposals generating between 400 to 800 megawatts of power and outlined key dates, including a December deadline for submitting applications and a May 2018 deadline for picking a winner or winners.

But the utilities have also sought input from offshore wind companies and other stakeholders, so it remains to be seen if those specifics are further tweaked

As the utilities have drafted their bid requirements, there’s been some debate about the right size for the wind farms.

DONG Energy argues that larger projects generating up to 800 megawatts provide “efficiencies of scale” that would lead to lower electricity costs for ratepayers.

Vineyard Wind believes the more practical approach is developing four projects of 400 megawatts each. And Deepwater Wind has argued for a range of projects of varying sizes.

“We think a more gradual approach makes the most sense,” said Jeffrey Grybowski, Deepwater Wind’s CEO. “You need to walk before you run.”

Timing also has been a concern among some stakeholders.

The Conservation Law Foundation, a non-profit environmental advocacy group, has advocated for an accelerated timeline that would allow construction to start as soon as next summer and the wind farm to be operational by 2023.

Vineyard Wind CEO Erich Stephens warns that a prolonged selection process makes it harder for firms to maximize their benefit from federal investment tax credits that are gradually being phased out. That, he said, could ultimately impact costs passed to ratepayers.

Offshore wind developers seem united on at least one point: they’re not overly concerned about President Donald Trump’s policies on renewable energy just yet. Trump was a vocal critic of offshore wind technology as a candidate and businessman.

The companies note that states play a vital role in setting the nation’s energy priorities since they regulate utilities, and Massachusetts’ Republican Governor Charlie Baker has reaffirmed the state’s commitment to its clean energy goals despite the country’s withdrawal from the Paris climate change agreement.

“There’s no pause for us,” said Thomas Brostrom, president of DONG Energy’s North American operations. “We’re remain really committed to the market here in Massachusetts and the U.S.”