Canada Goose takes flight as 2016 Ontario Exporter of the Year 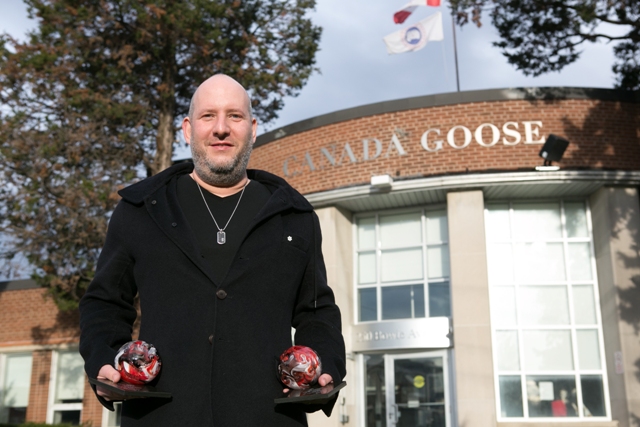 TORONTO—Distancing itself from a field of more than 25 finalists at this year’s Ontario Export Awards, winter jacket manufacturer Canada Goose Inc. has taken flight as the province’s 2016 Exporter of the Year.

The Toronto-headquartered company, which ships its famously-warm parkas, bomber jackets and down vests to more than fifty countries worldwide, was awarded the top honour at the Nov. 22 gala in Mississauga, Ont.

“We’re proud of our role in bringing Made-in-Canada jackets to the world and in exporting the brand of Canada on a global stage,” Dani Reiss, the company’s president and CEO, said. “It is an honour to win the Exporter of the Year Award and to be recognized as an industry innovator.”

Posting strong growth in a range of cold-climate markets—from Northern Europe to high-altitude India—Canada Goose has turned its strong “Made-in-Canada” reputation into a globally-recognized brand of outerwear. It’s also a fierce defender of its roots, and has continually bucked the offshoring trend by keeping its production in Canada while other clothing manufacturers relocated overseas. The company currently operates four Canadian plants and works with dozens of contract manufacturers across the country.

“Canada Goose has made an invaluable contribution to the Ontario economy through economic growth in their community, new investment and job creation, and I was honoured to present them with the 2016 Exporter of the Year Award,” said Andrew Skinner, Head of Global Trade and Receivables Finance at HSBC Bank Canada.

The Ontario Export Awards pay tribute to many of the province’s top export firms, highlighting the innovative approaches companies across the province are taking to forge into new international markets and expand their businesses.

13 awards were handed out to winners in a range of categories at The International Centre in Mississauga on Nov. 22.

And despite the rising tide of protectionist sentiment both south of the Canadian border and around the world, the awards served as a clear reminder of the huge role international trade plays in Canada’s economy. Last year, exports accounted for 31.5 per cent of Canada’s gross domestic product, according to the World Bank. Barring any drastic changes under the incoming U.S. administration, trade is only expected to become more vital to Canada’s economy.

“Canadian manufacturers have unlimited opportunities to develop a successful exporting strategy, aimed at strengthening their reach beyond the Canadian market, and establishing themselves as sustainable global market leaders,” James Moffatt, president of SYSPRO Canada, said.

Other winners included some of Ontario’s top exporters of clean technology, transportation equipment, manufactured goods, as well as food and beverage products.

A complete list of the winners is available here.